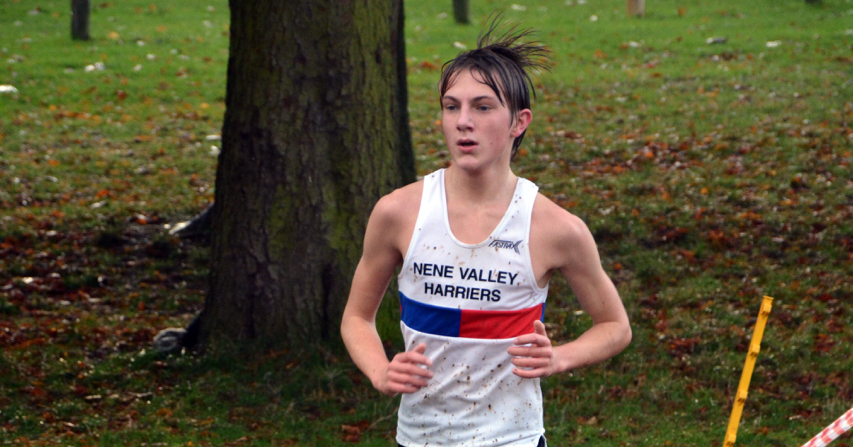 Nene Valley Harriers finished the cross country season in style as they impressed in a fixture against the Air Training Corp at RAF Cranwell.

The match was part of the ATC Championships, which incorporates the six UK regions of central and east, Wales and west, Scotland and Northern Ireland, London and south east, south west and north.

The region squads were made up of their first four in the regional championships – and then the first four athletes on the day counted in the Corp match against Nene Valley, although all ran in the same race on the day.

The athletes present gained the valuable experience of associating with the armed services, with a rank and file presentation plus buffet to finish the day.

In the under-17 men’s race, Oliver Bowling beat team-mate Bradley Spurdens to the line ahead of the other 26 athletes.

Bowling showed no intention of going for a hard run, with Spurdens leading him comfortably into the final field. The team score was then completed by Austin Herbert in fifth place overall and Rio Chilvers was 9th overall.

That score of eight points won the Corp match by a clear five points.

The under-20 team for Nene Valley was led home by Billy Mugnier, who ran well to finish in second place behind a very strong ATC winner.

This was followed by a mass sprint finish between two NVH under-17s, who had volunteered to step up an age group and two ATC athletes.

Unfortunately, one of the ATC lads proved strongest, leaving Michael Cawood in fourth and Jack Weddup fifth – meaning that the lads missed out on beating the Corp side by just one point.

The under-15 boys turned up in force, with seven athletes taking part in a field of 31 runners. Ethan Ellison ran a strong race, but was outrun in the last mile to finish second and claim his silver Corp medal.

Although well-supported by Denzel Mposo (5th) and Keilin Spurdens (8th), they were well beaten by a strong Corp squad.

Ollie Oakley made up the remainder of the team in 13th place and team support was provided by Ryan Pleasant (20th), Codi-Leigh Middleton (24th) and McKenzie Lightfoot (27th). It was a good outing for a talented young squad.

Meanwhile, the strength of the west and Wales ATC region was too much for the NVH under-15 girls, but Josephine Fortune split their team up with a great third place finish and probably one of the biggest smiles of the day when she received her large bronze medal.

She was supported by Olivia Ozkan (5th), Imogen Woodard (6th) and Paula Naylor (15th), but the team was not quick enough to stop the Corp side winning the match, although would have beaten most of the ATC Regions. Zoe Cawood also ran on the day, finishing 21st in one of her first outings of the year.

The ladies’ event (under-17 and under-20) saw another a great NVH turnout. Hermione Wright got stuck in from the start, going with the leaders and finishing in third place.

She was chased to the line by Beth Goymour (5th), with Beth Howells (10th) and Georgie Gibbs (12th) making up the rest of the team. Gibbs’ finish was another mass sprint for the line between three NVH and one ATC athlete, leaving Leigh Ann Rose in 13th and the unfortunate Alice Dolan finishing 14th.

This event served as a closing fixture for the cross country season, with Nene Valley now moving forward to the much-anticipated summer track and field season.