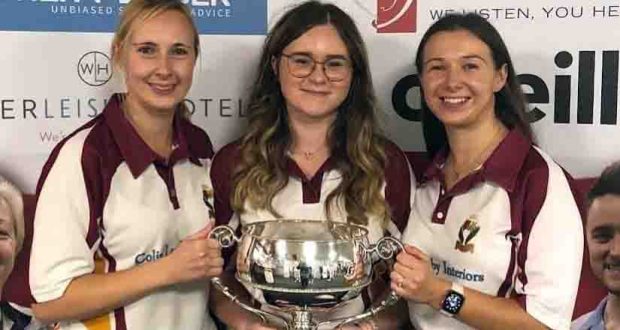 After successfully helping their team to top club glory last weekend, the terrific trio have now followed it up with an impressive individual title.

As an added bonus, Hill, Tomlin and Dunham will now represent England at the British Isles Championships, due to be held in Belfast in March 2022.

The much-delayed championships were completed at Nottingham Indoor Bowls Club last week, as the COVID-19 pandemic put a halt to the 2019/20 season.

In the last 16, Hill, Tomlin and Dunham played a rink skipped by Mary Price from Desborough – who was fresh from winning the over-50s triples title only the day before.

The Spalding girls started the stronger of the two teams and quickly opened up an 11-2 lead at five ends, before running out 20-11 winners.

The quarter-final proved to be even more comfortable as they stamped their authority from the outset, not allowing their opposition from Colchester to score until they were 16-0 up.

The match was soon over as they won 21-9 to set up an intriguing semi-final clash with the defending champions, skipped by Norfolk’s former ladies’ world champion, Katherine Rednall.

Norfolk started well and were 6-3 up after five ends.

However, the Spalding girls bounced back well to take the lead 11-10 at ten ends. The lead changed hands a couple more times but Spalding extended their lead to 18-13 at 15 ends before eventually booking their place in the final with a 21-14 win.

The final proved to be another tricky encounter against a rink skipped by a fellow international from Sussex, Lorraine Kuhler, who had won the ladies’ fours title earlier in the week.

Spalding were probably favourites going in to the showdown and they opened up a narrow 7-5 lead at five ends, which was slightly extended to 13-10 by ten ends.

Kuhler and her team were not ready to give up without a fight and, with three ends left to play, actually took a 16-14 lead. Hill, Tomlin and Dunham picked up a double and a single on the next two ends to lead 17-16 and take it effectively in to a final end shoot-out.

After good bowls from both teams, the jack ended up in the ditch, leaving the crowd on the edge of their seats as the skips went to play. After Kuhler drew shot to the ditch with her first bowl, Dunham held her nerve with her last bowl to draw within a foot of the ditch before Kuhler narrowly missed out with her last.

The ladies’ and men’s singles as always started the team off well with two comfortable wins and with the aggregate seemingly in the bag, Spalding only needed one win out of the pairs, triples and fours which they did so in comfortable fashion in both the triples and fours.

Next up for the defending national champions from Spalding is a tough home fixture against Barwell on the October 24.

They won comfortably on all rinks, but the top winning rink was skipped by David Nunney with Carole Nunney, Abs Belding and Betty Deaton who won 25-5. Graham Wright, Anthony Cronin and Mick Jennings also returned rink wins as the team won 102-44 and 14-0 on points.