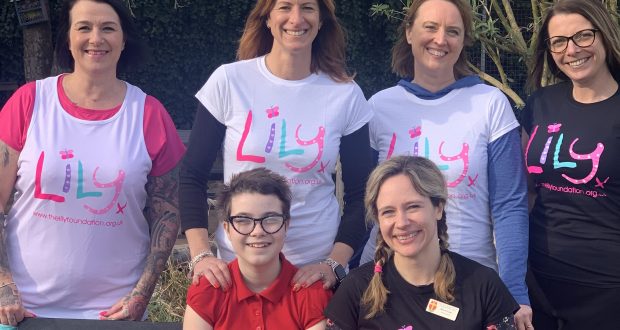 Staff and students join forces for the Lily Foundation

Staff at a Spalding school will be jumping from planes and running marathons to raise money for a charity that is helping a pupil and her family.

The new head teacher at St John The Baptist Primary School, Clare Robinson, will be skydiving in May as part of the campaign to help the Lily Foundation.
The charity has been providing help and support for pupil Kiya Clark who has mitochondrial disease.
The 11-year-old is thought to be the only person in the world with her particular strain of the disease which means she now uses a wheelchair.
When she was six years old, Kiya started suffering from headaches and then went on to develop seizures before she was finally diagnosed with the MELAS strain of the disease.
There is currently no cure for mitochondrial disease which affects people in multiple ways. Cognitive disabilities, seizures and respiratory problems are among symptoms.
During genetic testing it was revealed that her mum Beckie also had a milder form of the disease.
Teacher Frances Crampton is running the London Marathon in October for the fund.
“We wanted to do something to help Lily as it has helped Kiya and her mum Beckie so much.
“I’m running the marathon and a group of us were chatting about fundraising when Beckie said she would do a sky dive – as did our headteacher.
“We would also like support from local businesses, it would great if they could become involved and help.”
Children at the school have also been very supportive of Kiya throughout.
The fundraising campaign kicks-off this week with a special Mother’s Day breakfast or afternoon tea on Friday at the school.
“It will be a cup of tea with croissant in the morning, or a scone in the afternoon. It’s already really popular”, said Frances.
Next month there will be a raffle and other fundraising events planned during the year ahead of the marathon run.
“There will be lots going on and the Lily Foundation is creating a campaign page for us,” said Frances.
Last month Kiya featured on Channel 4’s The Dog House when the family travelled to Wood Green animal shelter and chose Coco, a cockapoo, to re-home.
The Lily Foundation was founded in 2007 by Liz Curtis in memory of her daughter Lily who died aged eight months from the disease.
It funds research into the disease and potential cures while supporting families living with the condition. It’s the largest funder of mitochondrial research in Europe.