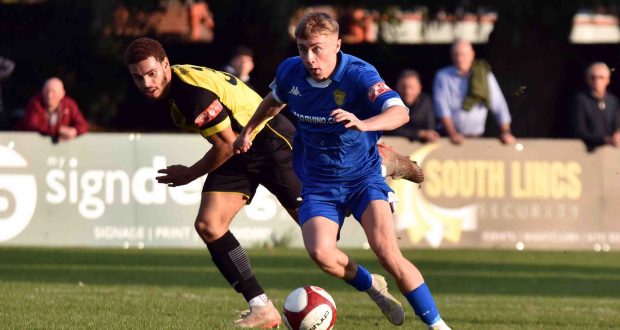 Spalding United have added two attacking players to their squad in Liam Adams and Harry Olivant.

Boss Gaby Zakuani has swooped to land attacking midfielder Adams from Wisbech Town, while winger Olivant, who is a Lincoln City youth product, joins from Harrowby.

The pair were both on the bench for Saturday’s FA Trophy win over Belper.

Tulips chief Zakuani said of Adams: “I’m pleased to be able to get Liam in and part of the squad and to be able to work with him at training yesterday was great.

“He’s someone who’s been on our radar for a while and the reports were that he was exactly what we needed, everyone at the club can’t wait to work with him and to help him develop his obvious talent.

“I’d also like to thank the management and officials at Wisbech for being spot on with the transfer.”

Adams added: “I’m an attacking player who likes to get on the ball and make things happen, I’m excited about getting involved with Spalding.”

Meanwhile, Olivant admitted he couldn’t turn the Tulips down.

He said: “I’m a pacy winger who likes to run at players and create chances, as soon as Harrowby told me that Spalding were interested I knew I couldn’t turn down the opportunity.

“I would like to thank Harrowby for the part they played, I can’t wait to start training and meet the rest of the lads properly.”