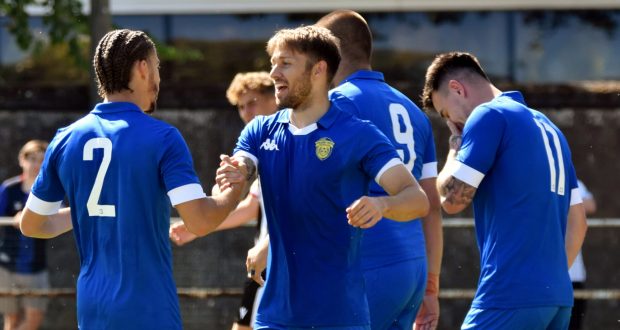 Impressive Spalding United booked their place in the semi-finals of the Lincolnshire Senior Cup with an eye-catching 2-0 win over Grimsby Town on Saturday.

Midfielder Lewis Brownhill (6) and new striker Gregg Smith (53) scored the goals early in each half as the Tulips brushed aside a very youthful but talented Mariners outfit.

In what was their first competitive game of the season, Spalding were without exciting new signing Marcus Maddison – who, alongside boss Gaby Zakuani, drew a gathering of Peterborough United fans to the Sir Halley Stewart Playing Field.

That didn’t go unnoticed by former DR Congo international Zakuani, who handed out a number of debuts and was very pleased with what he saw.

Zakuani said: “That was a good victory in Lincolnshire Cup against a very talented young Grimsby side.

“Pleased to be in the next round. The boys did well in the heat, plenty to work on but plenty of positives to build on.

“Loads of Posh fans in attendance and a Congo flag!

“Thank you for all the love.”

But it was the more familiar face of Brownhill, skipper under former bosses Matt Easton and Lewis Thorogood, who netted the opener on six minutes. He stabbed home at the second attempt after his initial effort was saved.

Jordan Macleod, another new recruit, then rattled the woodwork before Smith almost netted from a Glenn Yala cross.

The lead was doubled early in the second half when, moments after Stainfield saw a header cleared off the line, Smith nodded home to give his side some breathing space.

Subs Chris Assombalonga and Joel Brownhill both had goals ruled out for offside later on as the match opened up, with Spalding keeper Michael Duggan making a few routine stops at the other end.

Spalding are back in pre-season action at Deeping Rangers on Saturday (3pm), before Wednesday night’s much-publicised home friendly with Posh.