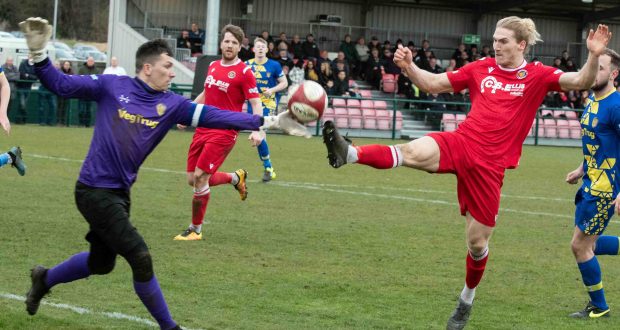 Spalding United slipped to a fifth successive defeat in BetVictor NPL South East on Saturday as Stamford came from behind to hand them a 5-1 derby reverse.

The Tulips took a shock 19th-minute lead at the Zeeco Stadium through Tobias Liversedge in front of a big crowd of 513.

However, the title-chasing Daniels soon levelled through ex-Tulip Tom Siddons (28) as the rivals went in level at half-time. It was one-way traffic after the break, however, as Siddons (54), ex-Pinchbeck United midfielder Harry Vince (62) and Tendai Chitiza (71 and 90) all scored to give the hosts a hefty victory.

Spalding interim boss Lewis Thorogood felt that the game went exactly to plan for the first 45 minutes, but admitted that Stamford’s quality shone through after the break.

He was, however, happy to take the positives from the performance despite seeing his side stay 16th in the table.

“I thought we did really well in the first half,” said Thorogood. “We looked at their strengths and weaknesses and really executed the gameplan very well.

“In truth, we could have gone in 2-1 ahead when Tobias went close to getting another goal.

“But Stamford are a fantastic side at this level and we knew that the second half would be different.

“We expected them to come at us and apply some pressure in front of an ample home crowd – and so it proved.

“They really ramped it up and we couldn’t keep the energy levels as high as we did in the first half.

“Our concentration wasn’t quite what it was either and they went on to win well.

“There are certainly positives that I can take from the game despite the result.

“We just have to learn to manage games better moving forward.

“Our next fixtures, whenever they are played, are much more winnable and we can aim to get a few results there.”

After surviving an early onslaught, Spalding went ahead when Jack Smith flicked on a free-kick for Liversedge to latch onto and fire home.

The hosts soon levelled, though, as top scorer Siddons fired a fierce finish into the roof of the net after picking up a deflected shot.

Jordon Cooke then cleared a Jack Smith effort off the line in the closing stages of the first half, setting the stage for Stamford’s super second half showing.

Siddons’ sensational finish on 54 minutes was the start of the goal glut, before Vince fired home the pick of the goals into the bottom corner.

With Spalding now stretched, Chitiza’s double piled on the misery and extended their run to seven games without a win.