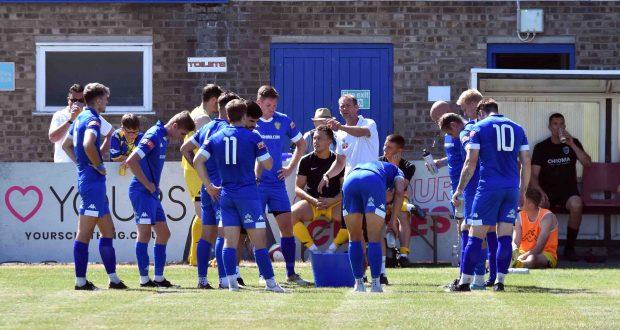 REDY TO GO: Spalding United are pictured in pre-season. Photo by JAKE WHITELEY

The two sides will meet in the Extra Preliminary round at the Sir Halley Stewart Playing Field (3pm) just two weeks after Spalding thrashed the Clarets 5-0 in a pre-season clash.

Whaley isn’t reading too much into that clash, insisting that the derby is a very tough draw for his side.

“We’ve had a very productive summer here,” said Whaley. “We’ve probably signed a few more players than we were expecting to.

“So, it’ll naturally take time for us to gel as a unit – even if the pre-season results have been encouraging.

“I’m not reading anything into the Deeping game, it was 0-0 at half time and fitness told in the second half.

“They’ve undergone a few changes there and looked behind us a little bit in terms of being ready for matches fitness-wise.

“Deeping have always been a strong side and I think that it’s a very hard tie for us.

“Obviously the FA Cup isn’t a competition you can look to win, but it can be a nice distraction.

“We want to have a good crack at the league this season and, if we can have a nice run in the FA Cup, it’ll serve as a pressure-free situation where we could end up having a big tie.”

Whaley will be without the injured Luca Bucci, who has undergone an operation on the leg injury he picked up against St Ives Town, and new signing Kamy Apindia Gille for the South Lincolnshire derby.

The winners will face Stamford in the next round.

Meanwhile, Spalding completed their pre-season campaign with a hard-fought 1-0 win at Biggleswade Town on Tuesday night – Brad Rolt getting the goal.

They also defeated a young Peterborough United side 3-2 in a friendly on Friday night.

First-half goals from Dylan Edge and Toby Hilliard put the Tulips 2-0 to the good at half time, but they were pegged back to 2-2 at the Sir Halley.

That was until Hilliard struck again to give Whaley’s side another impressive pre-season success.