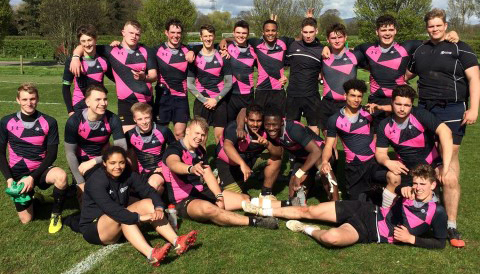 HAPPY DAYS! PRC have made the National Cup final.

Tim Moore, Theo Hoyles-Simpson and Alex Baker played their part as PRC defeated Myerscough College 27-13 in the semi-final at the Sale Sharks Academy in Preston Lanarkshire on Wednesday.

PRC reached the Plate final in May 2011, but this is the first time they have ever progressed to the main competition final.

There, they will face either Exeter College or the College of Richard Collyer at Moseley RFC (Birmingham) on May 9.

The game started with Myerscough moving the ball with ease from receiving the kick off and scored out wide after a couple of minutes.

PRC were shell-shocked and keen to get the ball and impose their physical game. The forwards attacked the fringes where PRC were the strongest and made positive yards on every take.

Myerscough were being driven back and kept infringing the back foot and were caught eventually which led to PRC’s Connor Porter slotting three points from the 22m line.

PRC raised the intensity with a hard-pressing defence that suffocated Myerscough which caused a number of handling errors which allowed the beefy pack to impose themselves again and again in the set piece.

PRC began to find holes tight and wide which allowed impact runners to find their game. Number eight Alexander Livingston kept making 20m to 30m every time he picked up from the base of the scrum and Myerscough had no answer, which then finally led to him going over for their first try of the game and an 8-7 lead.

The pack were now fired up and wanting to keep the ball tight, which led to another try a few minutes later with flanker Tim Moore powering over from the relentless try line pressure.

Just before the interval, Myerscough finally kept the ball through some very slick phases and their backline broke the pressure defence to go under for seven points, making it 13-12 to PRC at half-time.

After the break, the away side now had the wind at their back and had their tails up and were keen to stick to the game plan of moving the ball tight – until Myerscough could stop it.

Hooker Mo Gaibee went over as the pack were continuing their power game with tight pods making ground every time. Finally, after a brutal encounter, winger Ronan Rawlins made an amazing cover tackle after tracking his player from the half way line to put him down 5m from PRC’s line.

That allowed captain Tanaka Kanhukamwe to run all the way under the posts for the final play of the game to seal a 27-13 victory.

Coach Lewis Capes said: “What an amazing win by the boys. They played with their hearts on their sleeves and were so physical.

“This was PRC rugby of old – good old smash mouth stuff. I am very proud of these guys and now we go to the final.”