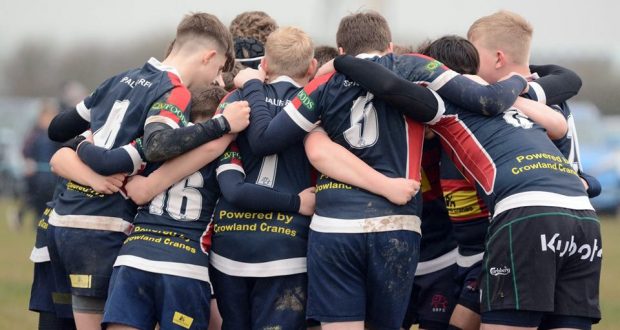 IN IT TOGETHER: Spalding RFC under-14s have trained together since primary school.

Spalding RFC under-14s saw their remarkable run in the Notts, Lincs and Derbyshire (NLD) Shield continue with a super 27-21 semi-final win over Melbourne.

In the last game the Town teens were able to play before the coronavirus outbreak ended the rugby season, they finished in in typical style by reaching the showpiece final – which could be played at the start of the next season.

The young Elephants team, many of who have trained together since their early primary school years, secured remarkable victories in all three of their group matches leading up to the semi-final – with scores of 57-7, 50-0 and 50-0 against their oppositions from Nottingham Moderns, Ashfield RUFC and Chesterfield Panthers respectively.

Jack Grundy led out a strong, disciplined and confident team – who unusually conceded seven points in the initial minutes of the match.

Shortly afterwards, Alfie Lewis, playing for Spalding in his first match, after returning from injury, grounded the ball over the try line, putting the hosts back in contention.

Throughout the season, the boys have played in less than favourable weather conditions and this was no exception, with squally showers punctuated the forty minutes of play.

The Town boys dominated the scrum, frequently gaining control of the ball from Melbourne’s put in.

Fly-half, Ned West’s kicking ability was tested to the full by not only the weather conditions, but the almost impossible angles he faced when kicking at goal.

Melbourne, who snapped at Spalding’s heels throughout the match, threatened a come-back as the full-time whistle approached, but a final try by Alfie Hoyles left the Derbyshire team standing as he shrugged off his opponent by sprinting down the wing.

The final score 27-21 put Spalding through to the NLD Shield final against Scunthorpe, which was planned to be played at the end of April.

It remains to be seen when that fixture will be completed.

The team would like to thank all players, coaches, parents, sponsors and officials for their help and support throughout the season.