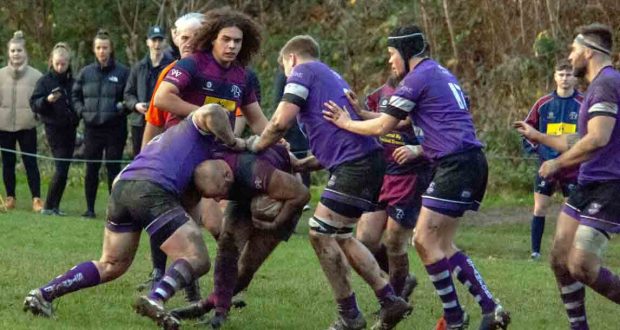 After going unbeaten in all competitions in November, Town made it four league wins on the spin by defeating their rivals at the Memorial Field.

Stamford, beaten at Spalding in the NLD Cup earlier in the season, immediately had the hosts on the back foot, encamping themselves deep inside the 22 as their forwards set up a series of rucks and carries.

Under intense pressure for the opening quarter of an hour, Town’s defence was sorely challenged, but held firm and showed excellent solidity, closing down any space for Stamford had to work in.

With no quarter being given it was no surprise when the referee reached for his yellow card for Stamford’s lock and minutes later Da Silva suffered a similar fate.

Town were looking impressive in the scrum, with props Peter Waudby and Luke Turner imposing themselves on the opposition.

But it was not until the 37th minute that Spalding opened the scoring with Mason converting a penalty kick.

Then, in the last minute before half time, a kick out to winger Gav Sharman saw him secure the ball and offload with a looping pass back inside finding full back Ed Booth up in attack to run in for the opening try.

That gave Spalding a hard worked eight-point lead at the half-time break.

Stamford came out all guns blazing after the interval, pinning the Elephants back in defence as the visitors again encamped themselves deep in Spalding’s half and it was no surprise when they came away with an unconverted try.

Town’s response was impressive. Hooker John Barrett had a run for the try line being stopped only an arm’s length away, but Town were surging forward through Harry Sharman and Ryan Chappell.

From a ruck established after a good carry from Turner the ball ran lose and Harry Cole was there to carry the ball over the line for an unconverted try.

Meanwhile, lock Jordan Templer was having a very dominant day in the lineout, with Stamford struggling to get to grips with the Spalding’s variations.

With excellent ball being provided, scrum-half Harry Exley was able to move the ball out to the backs and captain Dan Adams was cutting back inside with powerful runs for the next phase of play.

With both defences nullifying any ambitious back play, both teams were forced into kicking for territory with Town’s Harry Sharman leading the way and Mason chipping in.

The breakdown battle was still intense and Jacob Greaves replaced Turner having given his all.

Steadily, Stamford’s frustration built up again as they were making little headway. The penalty count against them was mounting up, with Willis Ingleby kicking for touch for Templer to win another lineout that saw Spalding establish another successful ruck.

Eventually, Stamford’s scrum half was yellow carded for dissent and with, the clock ticking down, a further away player received yellow.

That was the signal for Spalding to go for the jugular.

Ingleby kicked for touch five metres out and the lineout was won before a driving maul was established as Stamford desperately defended.

With the try line approaching, Chappell drove forward supported by Sharman and was over for his try in the final minute.

With an excellent conversion by Mason following, Stamford were denied a losing bonus point.

Although not a match of open flowing rugby, the derby duel was a tough amd highly competitive game lead by both sets of forwards challenging for field position together with the backs tackling any threatened break.

Another league derby awaits Town this Saturday when they visit Bourne (2.15pm).

In a game played amid shocking conditions with wind and rain prominent, the only try of the game arrived in the final minute of the match, which Lincoln also converted.

Both sides fielded teams made up of first and second team players on a night when playing good rugby wasn’t possible.