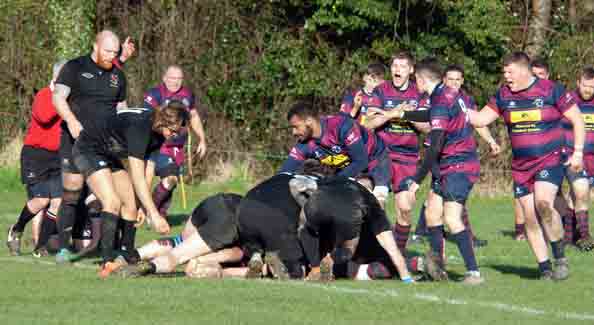 TOUCHING DOWN: Town go over for a try on Saturday. Photo by ADRIAN SMITH

Spalding RFC climbed into the top six in Midlands Three East (South) with a comfortable 43-14 win over Daventry on Saturday.

In what was the first-ever meeting between the two mid-table teams at the Memorial Field, Harry Sharman and Matty Holmes both helped themselves to a try double.

The other scores came from Gav Sharman, Will Shields and Pete Waudby as Town enjoyed a bonus point victory.

From the kick off Daventry were clearly up for the game and their forwards were soon trying to dominate tactics with their strong running back row crashing the ball up at pace.

But the Elephants were well organised in defence, clearly aiming to tackle low and hard with Miguel Da Silva and Jacob Greaves prominent. Soon the tables were turned, as the home team pressed upfield with Ash Anker making good yardage along with Luke Turner.

Encamping themselves on Daventry’s five-metre line, Spalding were looking to spread the ball wide but Harry Sharman’s dummy pass opened a gap and he was through for the opening try.

Town were gradually taking control of the game with their scrum holding its own and lineouts working well, with Jack Patrick at the front and either Harry Sharman or Anker jumping in the middle.

With possession won after 18 minutes of play, fly-half Mason set his backs up and the ball moved through the hands of centres Dan Adams and Willis Ingleby, with winger Holmes finishing off the move for his first try.

The home team were now playing some excellent rugby and were highly competitive in the forwards, looking to engage their backs when on the front foot.

It was Harry Sharman whose strength to break through a tackle allowed him to score next. And, with a well-taken conversion by Mason into the wind, Spalding were starting to rack up the points.

Within five minutes full-back Gav Sharman was bursting into the line at pace and evaded Daventry’s attempted tackles for a converted try and a 24-point lead.

The game was threatening to be another try feast for the Elephants, but Daventry responded with a strong run by their right winger for a converted try.

But, with half time approaching, Spalding were again using their forwards to drive up field with John Barrett putting in a good shift.

From the ensuring ruck, scrum-half Shields spotted a gap, twisted and turned through two further tackles and reached the try line.

Another good conversion into the wind by Mason and Spalding’s lead was 31-7.

A feature of the first half was Town’s discipline, especially with the number of tackles having been made to keep Daventry in check.

With no penalties conceded, this was becoming an outstanding performance.

After the break, Spalding looked to be continuing were they left off, pressing Daventry back deep within their half. Prop Waudby, at pace, crashed through their defensive wall and just reached out to place the ball on the try line for another converted score.

However, with a bit of space to work in after the Daventry forwards had created a foothold in Spalding’s half, their fly-half found a hole in the home defence for a quick response and a converted try.

With the game opening up in the latter stages, fly-half Mason, with more room to play in, was spreading the ball wide to stretch a tiring Daventry.

Full-back Gav Sharman was also coming into the line more frequently to create an extra man and left wing Holmes was the beneficiary as he received the ball out wide and used his speed to score the final try near the corner.

Overall it was a very professional showing from Town, who now turn their attention to a trip to seventh-placed Rushden and Higham on Saturday (2.15pm).