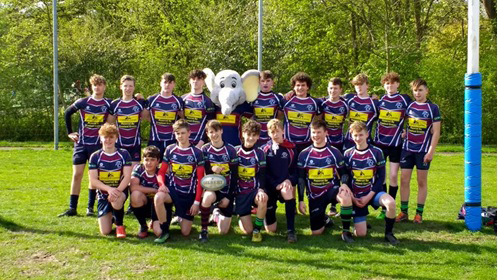 The talented teens from Spalding RFC under-15s have completed a six-year journey by being crowned NLD Cup winners.

Having reached the final of the competition for the third year on the spin, the Spalding lads finally defeated arch rivals Nottingham – who had beaten them in the previous two finals – 27-5 to clinch the crown.

With the game less than 12 minutes old, the Nottingham stand off chipped a ball over the Town defence, only for full back Adam Johnson and winger Ryan Burton to collide into each other allowing the free rolling ball to be collected for a touch down.

Worse news was to follow, with Johnson having to leave the field taking no further part in the game.

However, Spalding showed their mental strength by immediately coming back in to the game through quick hands in the backs and a superb running line from Will Wand, who raced over to score under the posts.

Charlie Beecham slotted home the conversion to put them ahead.

Now full of confidence, the Town forwards were winning the rucks and taking on a physical Nottingham pack, while the backs were making ground and taking excellent decisions from all parts of the field of play with assured passing, tactical kicking and offensive tackling.

This pressure on Nottingham finally told as the ball went through the hands to Ollie Whiley to score in the corner on the right wing.

Moments later the ball went wide to the left wing and with half a pitch to go Ryan Burton outpaced the chasing Nottingham players to touch down, only to be pulled back to half way for a dubious forward pass decision.

Spalding opened the second half under pressure from a Nottingham side eager to pull back the two score advantage, but they rode out the first ten minutes of pressure to take command.

Will Wand raced to his second score of the evening then, moments later, Ethan Martin received the ball on the right wing and ran 50 metres, outpacing his markers to score Spalding’s fourth try of the evening.

With renewed confidence Spalding continued to press the Nottingham defence – and they finally scored when skipper Jack Wright bulldozed his way through the 22, leaving desperate tacklers in his wake.

Despite the one-sided nature of the scoreline, Nottingham never gave up the desire to breach Spalding’s line and pressured their 22 time and again for the last five minutes of play.

But Town’s refusal to allow another score against them said everything about their performance in the final, highlighting their mental strength, physicality and team ethic.

At the final whistle the entire squad, including vice captain Jack Patrick, Will Neal and Max Pretorius – who all missed out with injuries – ran to embrace each other and celebrate, with the hoodoo broken.

These qualities, along with their footballing abilities, laid the foundation for a deserved win and the coveted tag of NLD champions.

They won a friendly 103-0 against Amstelveen, before entering the Hilversum International Festival.

Wins against Widnes (12-3) and Oswestry (14-0) were followed by a 14-7 reverse against Newbury, but Spalding booked a place in the semi-finals by seeing off Hilversum 43-0.

However, with eight players out injured, they were forced to withdraw from the event and didn’t contest their last four clash.