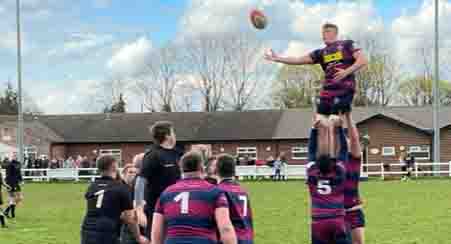 TRAVEL SICKNESS: Action from Spalding RFC's 12th defeat from as many away games. Photo by JOHN CONSTABLE

The defeat ensures that Town have gone an entire season without winning away from home, with the weekend reverse their 12th loss on the road from as many outings.

Having upset second-placed Bourne the week before, the Elephants travelled with high expectations and were full of confidence.

Indeed, they made the perfect start when – after just two minutes – they made an interception in the backs.

The ball was moved quickly out to right wing Ben Shields who, with the home team’s defence closing in, was able to score in the corner for a stunning opener.

Fairly soon it became apparent that Town’s scrum was going to have a hard time with their front row of Richard Stevenson, Miguel Da Silva and Harry Cole struggling to hold Daventry’s power.

Spalding were battling to subdue their hosts, but were not helped when Sam Noble was yellow carded for a high tackle, which seemed very harsh.

From the subsequent penalty kick to touch, Daventry won their lineout possession and, with a planned move, their tall and powerful fly-half charged over the line for a converted try.

Spalding were being forced into defence, with centres George Brown and Jack Patrick impressing with their tackles as the home team were looking to spread the ball out wide.

With half time approaching and only two points between the teams, Daventry struck.

Spalding knocked on while defending their try line and, with their scrum in control, the hosts drove the Elephants backwards to pick up their second score.

The half time break did no favours for Spalding as, immediately from kick-off, they were pegged back and with space, their left winger was over the try line.

Town then suffered a further yellow card to Cole for indiscipline. During the ten minutes that followed Daventry made their numerical advantage count and sealed the game with two tries to go 29-5 up.

The home side also had a tall front lineout jumper in competition with Spalding’s Will Shields, while Alan Charevicius was being lifted towards the back of the lineout.

Both were being challenged for possession and Daventry, inside their own 22, stole a Spalding lineout and moved the ball out wide through their backs.

With tackles then missed by Town, a further try had been conceded.

Better was to follow, though, as Town were finally able to put their game plan together using their forwards to carry the ball forward, with Ash Anker and Noble leading the way.

The ball was being recycled from a series of rucks on Daventry’s try line and finally centre George Brown crashed through a few tackles to score with a good conversion from fly-half Conall Mason.

Typically, it was the home side who had the last word with their final try of the clash sealing a 31-point success.

The loss leaves Spalding in tenth place and just two points clear of Daventry, who are one of only two sides below them in the table.

They also have a game in hand on Town – which is a home clash against bottom-of-the-table Queens on Saturday.

Spalding’s final game of the season is on April 23 and is at home to second-placed Dunstablians at the Memorial Field. They could go into the clash in the bottom two.