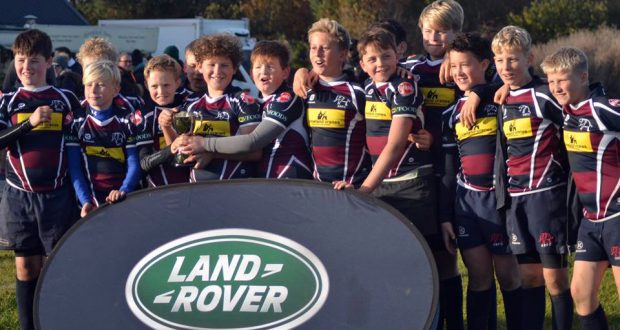 The talented young guns from Spalding RFC under-12s have booked a dream trip to Twickenham after winning the coveted Aviva Premiership Landrover Cup at Oakham Rugby Club on Sunday.

Their prize for winning the tournament is a trip to the home of rugby for the entire under-12 squad – and they will get to play during half time at the Aviva Premiership final on May 27 in front of up to 82,000 people.

Glory in the Landrover Cup was a season-long goal for the Town team, who play a fantastic style of rugby.

Spinning the ball at every opportunity and rucking with great speed and venom, every player in the team plays a key role.

The boys have been working hard since early July, training on Thursday nights and Sunday mornings, with many of them also playing touch rugby on Wednesday nights to improve their handling skills and running lines.

So far this season, the under-12s have had warm up tournaments at Kesteven, where they scored a record 115 points in five games and only had one try scored against.

Then, at the recent Peterborough Festival they beat every team they came up against, and again only conceded one try.

That set them up perfectly for the main event at Oakham. Run by Premiership side Leicester Tigers, there were 16 teams taking part, from as far as Lichfield in Staffordshire to Southwold in Suffolk.

Spalding played six games and won all of them – and once again only had one try scored against them all day.

Amazingly, that means the team have only conceded four tries since September, while they have lost count of the amount of tries they have scored.

Head coach James Fitzpatrick said: “The players really deserve this and we are very proud of them. They are a fantastic bunch of lads, who are very coachable, easy to work with and want to get better every week.”

Kevin Wand, who is head of the playing committee for the club and one of the under-12 coaches, added: “They are a talented bunch who play for each other and have true belief in themselves.

“They work hard, train hard and are very coachable. They have some great rugby ahead of them and will turn into excellent rugby players.

“They deserved to win with a great brand of rugby that the other teams could not defend. They will enjoy and thoroughly deserve the Twickenham experience.”