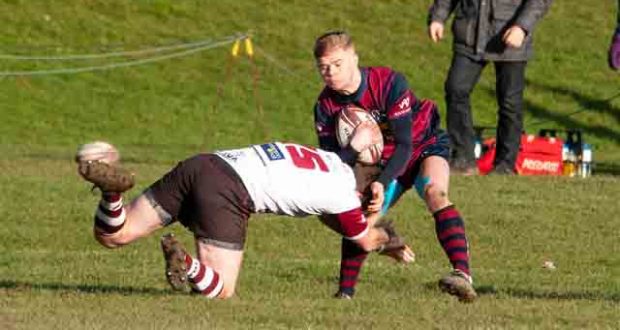 Spalding RFC were forced to settle for a draw in their rearranged Midlands Three East (South) game at Rushden and Higham on Saturday.

The result could have gone either way for Town, who were trailling by five points late on before grabbing a try and missing the conversion – only to then see the hosts send an even later penalty wide of the posts.

Spalding started well, showing good organisation as they drove forward setting up a series of rucks, ready for the next phase of play.

To the fore were props Luke Turner and Pete Waudby carrying effectively, followed by scrum-half Will Shields, who was quick to the breakdown looking for runners to come onto his pass, with Ryan Chappell and Harry Cole eager to engage the opposition.

After just three minutes Spalding recycled the ball and Rushden infringed at the breakdown, but Conall Mason’s penalty kick drifted wide in the swirling wind.

The game was being played in Rushden’s half, with wave after wave of Town pressure being held back, but only at a cost of a number of penalties.

Each time Spalding elected to take a quick tap kick, setting up the next phase. With at least four penalties in quick succession, it was perhaps surprising the referee did not penalise the home team with a yellow card.

After 20 minutes of play Ryan Chappell left the field with a slight recurrence of an injury he was carrying, to be replaced by Rob Lucas playing scrum-half and Will Shields moving to flanker, in the forwards.

The Elephants eventually reaped their reward after half an hour. With a penalty kick to touch by centre Willis Ingelby to the five metre line, a driving maul was set up and Ash Anker finished off by touching down.

With half-time approaching Spalding were penalised for hands in ruck and Rushden’s successful penalty kick resulted in a half time score of 5-3 to the visitors.

Surprisingly playing up a slope and against the wind, the home team stepped up their intensity and started to take the game to Spalding, as their forwards found new energy.

Within the opening minutes Town were penalised for offside and a successful penalty kick edged the home team in front.

The forwards’ battle intensified as Spalding tried to take back control of the game – and matters spilled over with Harry Sharman and Rushden’s lock both shown yellow cards.

It was then that Town grabbed their opportunity. With a penalty kick following the yellow card offences finding touch, the lineout ball was won and worked infield.

From the breakdown Lucas passed swiftly to Mason and through the hands of Ingleby, with Jack Patrick from full-back bursting into the line for a well worked try and a six-point lead.

However, Rushden’s Fijian centre was proving difficult to contain, with Spalding’s tackling falling off his strong runs. Things got worse when Ash Piccaver was adjudged to have made a high tackle and yellow carded, reducing the Elephants to just 13 players on the pitch.

The home team immediately capitalised, as they piled forward and with the advantage in the scrum their back row went over for a unconverted try. Five minutes later a further poor tackle resulted in a successful penalty kick and a two-point advantage.

Now in control and with Spalding desperately trying to regain their shape and organisation, a further successful penalty seemed to have secured the win for Rushden as they took a five-point advantage with ten minutes of play remaining.

However, Spalding rediscovered their form, with the forwards crashing the ball up generating phase after phase of possession.

It was then the turn of Rushden to be penalised, with a quick tapped penalty kick finally bringing rewards.

As the ball was moved swiftly along the back line it was Ingleby who, at pace, cut through the defence and crashed over out wide to level the scores.

That left Mason with a difficult kick into the wind for the victory, but he was unsuccessful.

Rushden were not finished, however, as Spalding were penalised in the dying seconds – but the long distance kick failed with both teams claiming two points for a draw.

Next up for Town is their big Midlands Senior Vase final, to be played away against league rivals Dunstablians, on Saturday (3pm).