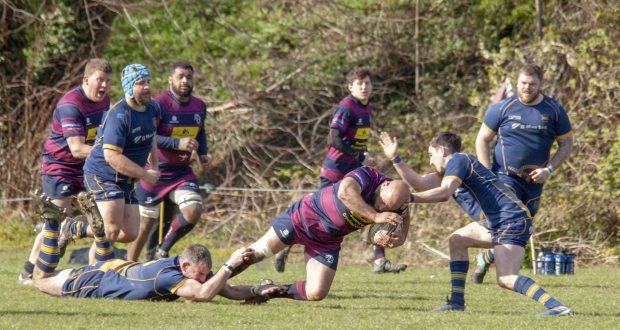 Spalding RFC produced one of their best performances of the season as they beat high-flying South Lincolnshire rivals Bourne 24-15 on Saturday.

With Town down in ninth and Bourne second at the start of play, the visitors were hot favourites to complete a Midlands Three East (South) derby double at the Memorial Field.

But their plight wasn’t helped by a straight red card on 30 minutes, when Spalding’s Gav Sharman was the victim of a tip tackle, landing horribly on his neck and head and forced off injured.

With a good crowd watching – buoyed by a bunch of Bourne supporters – the teams took to the field in glorious conditions and within the opening minutes the Elephants announced their intent.

Jack Patrick, who was making a welcome return to the fold after more than two years away from rugby, fielded a long downfield kick by the visitors, who were looking to pin Spalding back deep in their half.

Immediately he counter-attacked, jinking his way past three or four Bourne players and released left wing Sharman into space with a great pass. Using his speed, he rounded his opposite number and ran in the opening try.

The challenge was on and Bourne responded by bringing their effective backs into play. Town’s defence was up together, though, with good tackles coming by centres George Brown and Taylor Crowson.

However, Bourne pulled three points back with a penalty kick after 18 minutes – then, using their pace, they took the lead when their left wing Josh Lynch crossed the line for an unconverted try to establish a three-point lead.

At this stage the game was end-to-end, with both scrums fairly evenly matched as Spalding’s front row of Pete Waudby, Miguel da Silva and Tom Parker stood up well against experienced opponents.

It was also a good battle in the lineout, with Will Shields being lifted at number two and Alan Charevicius towards the back of the lineout with colt Will Stevenson throwing in.

A tactical change was then made from the bench to bring Harry Sharman on after 30 minutes, replacing Stevenson.

Following the change, Spalding were combining thrusting forward play with more use of their backs, with scrum-half Adam Sutcliffe and fly-half Conall Mason teaming up well and occasionally using a long pass out to the wings to exploit space.

Gav Sharman, who was again showing his pace, cut back inside and was tackled by his opposite winger, Jamie Colangelo-Long.

This was the tip tackle that saw the Spalding speedster forced off injured, replaced by Callum Lewis, and his Bourne counterpart sent off.

In the lead up to half time you would not have known that Bourne were a man down.

But, finally, the home forwards – with pick and drives – established themselves deep in Bourne’s 22 and Ash Anker drove over.

With Mason converting, Spalding had a four-point lead in the bag at half time.

Thankfully, Gav Sharman then returned to the field alongside Jorritt Schrauwers for the second period.

But it was the away side who struck first as they went back ahead after Lynch bagged his second try, converted by Sam Evison.

It looked like Bourne had extended their lead even further from a position in front of the goal posts when their scrum-half nipped in from an undefended ruck, but it was disallowed with a knock-on awarded to Spalding.

Bourne did not help themselves when they went a further man down to a yellow card after a poor tackle on Anker.

This left them 13 against 15 for ten minutes proving too much, as Sam Noble and Harry Sharman drove forward with big carries and, from a quick tap penalty, Will Shields stole over.

With a simple conversion Spalding had capitalised and were narrowly back in front.

Bourne were having to use all of their experience to stay in the game and were kicking deep – but this played into the hands of Patrick from full-back to counter-attack.

Their forwards were giving their all and from a lineout, the new 50/20 law, a driving maul was established over the try line, but Spalding were able to hold the ball up for a turnover.

With minutes left, Spalding executed the best play of the game. They were in possession through their forwards deep in Bourne’s territory on the right hand side of the pitch and, from the ruck, Mason received Sutcliffe’s pass.

Looking up he could see left wing Lewis free and in space and executed a superb kick.

Lewis caught it in flight on the run to cross the try line unopposed for an outstanding and match-winning try.

To their credit, Bourne had bravely stayed in the game despite being a man down, but Spalding upped their play from previous performances with hardly a tackle missed and their press defence and organisation, closing down their opponents’ attacking options.

With four tries scored, Spalding also came away with a bonus point to add to their win and stay ninth.
Next up for Town is an away trip to Daventry on Saturday (2pm) for their penultimate game of the season.