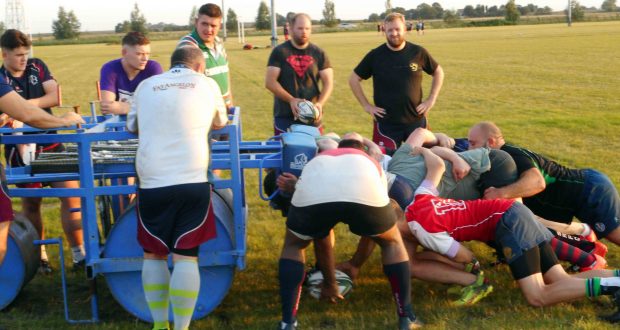 HARD AT WORK: Spalding RFC are pictured training with the scrum machine.

Spalding RFC have stepped up their preparations for the new season with two strong friendly showings over the past week.

Town took a squad of 34 players to Deepings RFC for their opening fixture last Thursday in a match that was split into four quarters.

They ran in six tries to Deepings’ one, with Connall Mason, Ash Piccaver, Will Shields, Willis Ingleby, Harry Brown and George Brown all on the scoresheet.

That was followed by a 29-3 success over rivals Boston on Saturday.

In this clash, Spalding’s forwards demonstrated their pace and tries from Sam Cooke, Ryan Chappell and Jordan Templer put them in command at half time.

Captain Dan Adams helped himself to a try with a typical forceful run through the middle of the opposition defence after the break, followed by a try from player/first team coach Harry Sharman.

The try of the afternoon was by fly-half Taylor Crowson, before Boston added a late penalty.

Town’s pre-season training began way back in June with good numbers attending and building on the enthusiasm that saw them climb up into third place in the Midlands Three East (North) league with a late surge.

This season Spalding will be playing in the Midlands Three East (South) with more local fixtures such as Bourne and Stamford, while also travelling to Bedford, Northampton and Luton

Captain Adams said: “The players have been training hard over the last couple of months and we have seen them come together as a team.

“The intensity, determination and focus the players have been showing is encouraging and in the upcoming friendly matches we hope to give each of them the opportunity to show what they can do. Shirts are up for grabs in all positions and the players know that this year.

“This is a great opportunity for the younger players coming through and for the experienced players to show what they can bring to the team.”

Spalding’s first competitive game of the new season sees them host Stamford in the NLD Cup on Saturday, August 31 at the New Ground on Drain Bank North.

Spalding begin their league season with a trip to Dunstablians on September 14 (3pm). Their home matches in the league will still be played at the Memorial Field.