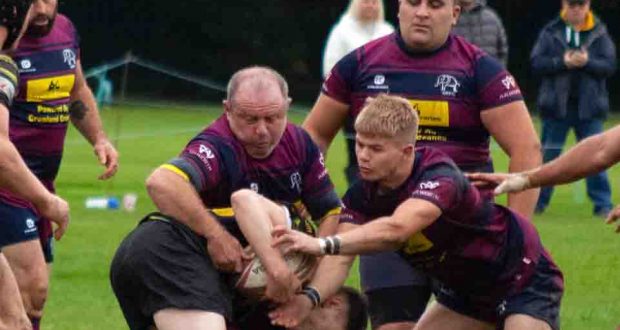 BATTLE: Willis Ingleby (right) and his Spalding RFC team-mates challenge for the ball on Saturday. Photo by ADRIAN SMITH

Spalding RFC moved into the fourth round of the RFU Senior Vase with a thrilling 27-24 victory over Mellish on Saturday.

Town were ten points up at half-time at the Memorial Field, but had to survive a second-half comeback to secure their passage by the narrowest of margins.

Mellish, who the Elephants had not played for 15 years or so, were promoted last season to the same standard as Spalding – and looked confident as they took to the pitch, fielding some big and strong forwards.

Town welcomed back Harry Brown to their side at number eight, while Ryan Chappell and Crowson borthers Wilson and Taylor were also available to line-up again.

Mellish took control immediately from the kick-off, using their forwards to punch holes in Spalding’s defences.

However, the ball was soon stolen in the middle and was spread out to Willis Ingleby, evaded several attempted tackles to go over the line for the opening score in the corner.

A battle was developing between the two sets of forwards, both keeping the ball tight. Flanker Will Shields was demonstrating his speed to the breakdown and Luke Turner was impressing with his carries.

Spalding had established themselves deep in the visitors’ half and a cut out pass by scrum-half Wilson Crowson saw Chappell burst through to score after 15 minutes.

Town hit back quickly when full-back Connal Mason, who is getting better each week, next burst forward, stepped inside then outside defenders and was over the try line.

A few minutes later hooker John Barratt hobbled off and was replaced by Aaron Coupe. Before Spalding could settle back into their tempo, Mellish again spread the ball wide for their excellent full-back Jack Whelbourne to show his speed and agility to score under the posts.

Not to be outgunned, Spalding speedster Sharman received a rare pass and outstripped his opposite winger out wide to run in behind the posts. With a conversion by Mason, Town went into half time ten points to the good.

The second half was a different story as the away side started to have the upper hand, with their forwards gaining territory and exerting pressure in the scrums.

But Will Shields was still doing an excellent job in the lineout, well supported by Jason Steels.

It was, however, not long before the Elephants’ lead was cut to just three points with Mellish’s backs cutting through the home defence.

Steadily, Town’s forwards regained territory, eventually camping themselves within sight of the try line. But they knocked on as they drove forward, meaning the ball was turned over.Mellish with a scrum advantage, put the ball in – only for hooker Coupe to secure the ball.

At the back of Spalding’s scrum, Brown then picked up and drove down the blind side for a very determined try and an eight-point advantage with 12 minutes remaining.

The visitors did not give up and started to throw the ball around their backs, stretching Town’s defence. It was no surprise when one of their substitutes broke clean through for a converted try.

That left the hosts three points ahead with just seven minutes remaining, with only a try saving tackle by Wilson Crowson allowing Spalding to hold on for their victory.