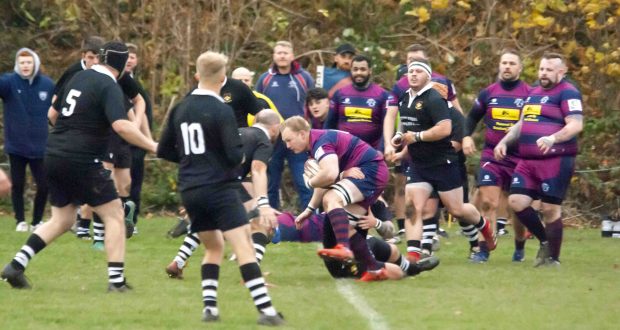 Spalding RFC produced one of their best performances of the season as they raced to a bonus-point triumph over high-flying Luton in Midlands Three East (South) on Saturday.

Resurgent Town ran in six tries as they secured a 36-21 triumph at the Memorial Field for what was their first win since beating relegation rivals Queens 17-10 back on November 6.

Their third win of the season sees the Elephants stay in tenth place in the 12-team division, but they’re now four points clear of the foot.

Spalding welcomed Taylor Crowson back from injury at inside centre and, with the late withdrawal of George Brown, Ben Shields had his first start in the back row at open side flanker, rather than in the backs.

Within the opening couple of minutes Spalding showed their intent, with captain for the match Ash Anker carrying the ball through the middle setting up a ruck.

Scrum-half Adam Sutcliffe quickly whipped the pass out and outside centre Lewis Adams broke straight through Luton’s defence to score under the posts.

And, with a simple conversion from fly-half Conall Mason, Town had an early lead.

However, Luton – who are sitting mid-table in the league – were looking at this game as a possible win and they replied after ten minutes with an unconverted try.

The competition between the two sets of forwards soon heated up, with the visitors being pushed back in the scrums and Spalding were also getting to the breakdown first.

Town’s Pete Waudby was shown a yellow card, but the intensity between the forwards did not let up as Luton looked to capitalise on the one man advantage.

Spalding were not giving an inch and, in frustration, the referee saw a Luton player throwing a punch and a red card was shown.

Despite their numerical disadvantage, the visitors kept up the pressure with Town penalised at the breakdown for not rolling away and hands in at the ruck and, with successful penalty kicks, Luton had eased into a four point advantage.

Spalding’s defensive organisation was being put to the test, but the tackling by Crowson and Lewis Adams was outstanding and kept their opponents at bay.

With half-time rapidly approaching, Town – in attack – moved the ball at pace along the backs. Gav Sharman, back in his normal position on the left wing, showed his speed to round Luton’s defence for an unconverted try and a one-point advantage.

From the second-half restart Spalding looked to capitalise, with Kev Hudson and Miguel Da Silva both making in-roads with good carries, while the young back row of Will Cole and Shields were a constant menace with their speed to the breakdown.

Town looked to have gained the upper hand when right winger Callum Lewis outpaced Luton’s wide defence to score in the corner, but the away side came back a few minutes later with a successful penalty kick to narrow Spalding’s lead to three points with 25 minutes remaining.

Then came the standout try of the day from Spalding. Harry Sharman and skipper Anker both used their experience and knowledge to gain territory with pick and goes.

With a position inside Luton’s half, the ball was passed out wide and centre Crowson saw a gap in the defence, sliced through at pace, swerved past the last line of defence and scored a scintillating try under the posts, which was duly converted.

However, Luton were still in the game and they replied with their own converted try, bringing it back to only a three points difference.

Spalding’s confidence was not knocked, however, as they continued to look to their backs and wingers to wreak havoc.

Indeed, it was Lewis with his second excellent try on the right wing who showed fine finishing. His try in the corner extended the home team’s lead to eight points with five minutes remaining.

With Luton searching for a score, they lost the ball on the halfway line and the ball was quickly passed to sub Fabian Simpson on the wing.

With the away defence stretched, Simpson enjoyed a glorious run in from 50 metres to score under the posts – and with a simple conversion the whistle was blown for the end of an exciting game.

Spalding seemed transformed from the previous weeks, with their support play vastly improved along with their defensive organisation.

But the stand-out feature was their confidence to run and pass instead of kicking possession away.

Town are back at home on Saturday when they welcome Daventry (2.15pm), who are one place and one point above them in the table.