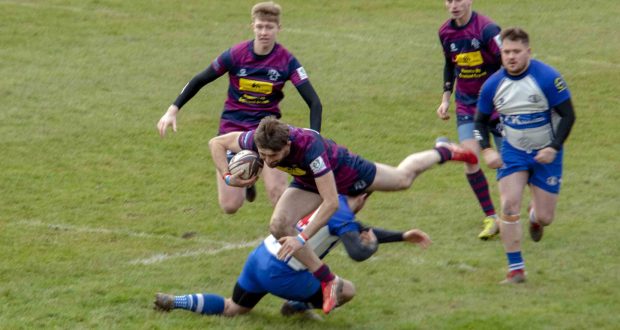 ON THE CHARGE: Action from Saturday's clash. Photo by ADRIAN SMITH

Spalding RFC made it three home wins on the spin in Midlands Three East (South) with a potentially pivotal 27-15 victory over rivals Northampton Men’s Own on Saturday.

The Memorial Field triumph gave Town an extra bonus point too, which sees them move eight points clear of relegation rivals Northampton and Daventry and nine better off than basement side Queens.

Boasting the rare luxury of selection problems, the Elephants welcomed former captain Harry Sharman back in the pack at number eight and another ex-skipper Ryan Chappell to the bench.

Men’s own started brightly, knowing that earlier in the season they had racked up 40 points at home against Spalding playing an attractive, running game.

With the wind advantage in the first half, their fly-half was soon kicking deep for territory and putting Town under pressure.

That eventually told and a successful penalty kick put the visitors into an early 3-0 advantage.
However, the lead only lasted two minutes as, from a good re-start kick by Conall Mason, both flankers Will Shields and Will Cole were up challenging.

With possession regained, centre Taylor Crowson broke through Northampton’s initial defensive line with lock Sam Noble. A good carry set up a ruck just a couple of metres short of the try line and prop Harry Cole used his strength to drive over the line.

What a purple patch of play followed, Spalding further increased their lead within three minutes, using their speed in the backs to open up the visitors’ defence.

Gav Sharman’s pass then gave left winger Callum Lewis a run for the try line from 20 metres for a further score.

With a good conversion kick from out wide by Mason, the hosts had a nine-point advantage.

The pendulum swung again soon after as, within five minutes, Men’s Own showed that their centres had pace to burn as the ball was worked across from left to right giving their right winger the simple task of a run in.

A good conversion followed and there was only one score between the teams once again.

The visitors’ fly-half dominated the game for the next 15 minutes with some excellent kicks using the wind, but no further scores were added.

The second half opened with Spalding on the attack, having brought both Ryan Chappell and Ash Anker off the bench for Connor Lilburn and Will Cole.

From an attacking ruck, Men’s Own were caught offside and the penalty kick was successfully converted by Mason.

Town were over again when the backs opening up Northampton’s defence, with Mason and Taylor combining at pace to put Gav Sharman in for an excellent try – taking their lead to ten points.

The visitors then had a man yellow carded and, with a man advantage, Spalding went searching for the killer blow.

Harry Sharman created space on the blind side, with a forceful charge and hand off, giving left winger Lewis another scoring chance as he cut back inside at pace and, with the conversion successful, Town were starting to look out of sight.

Men’s Own did keep battling to the end, though, and showed their ability as they counter attacked from deep through their centres for the final score with only a minute left to play.

It mattered little, though, with Town boasting a crucial bonus-point victory.

They’ll be hoping for more of the same this Saturday when they visit rock-botton Queens (2pm). A victory would be Town’s first on the road this season.