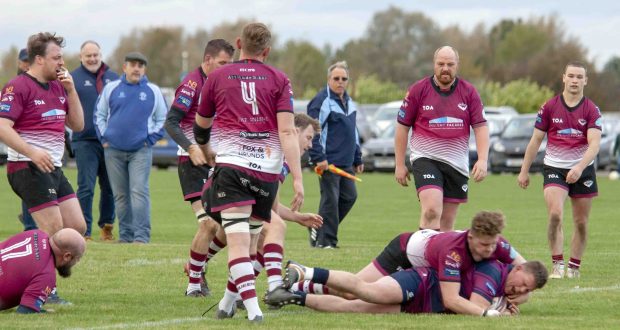 Spalding RFC picked up their second win of the Midlands Three East (South) season on Saturday – but rock-bottom Queens made them work for their points.

Tries from long-serving trio Pete Waudy, Harry Sharman and Mark Haighton got the job done for Town in a game that was played at their New Ground on Drain Bank North.

Vice captain George Brown once again led the Elephants’ team out against Bedfordshire side Queens, who were seeking their first win of the campaign.

With both sides badly needing the points at the wrong end of the table, a cagey clash was expected.

Returning for Spalding were prop Waudby, flanker Ash Piccaver and number eight Sharman, moving Brown back in a more familiar position of centre and making for a much stronger side than has lined-up in recent weeks.

The early exchanges saw Town dominating possession, using their forwards with strong carries to gain territory with a fairly strong wind assisting when kicking for touch.

However Queens were showing an adventure in their backs, with their scrum-half proving tricky with snipping runs and their full-back lighting up the pitch with his speed.

Indeed, for a team lying bottom of the table and playing away from home they were proving a tough nut to crack.

Harry Cole, Sharman and Connor Lilburn were prominent as Spalding kept pressing deep inside Queens’ territory and finally Waudby charged through the defence to dive over the try line.

With Conall Mason converting, the Elephants were on their way at 7-0.

However, it was never going to be a walkover for Spalding and Queens swiftly pulled a try back as they easily opened up the home defence out wide with the confidence to pass along their backs.

But it was Spalding’s pack of forwards who took hold of the game, with their scrum having a slight advantage and the tall Haighton winning good ball in the lineout.

A strong carry by Ash Anker set up space for Sharman to burst through and, with a sidestep, he was over for a converted try.

Minutes later, Sharman looked odds on for a second try as he burst through Queens’ defence – but a last ditch tackle saw him lose the ball forward just a metre short.

The second half saw Town more on the defensive, as Queens used the benefit of the strong wind to kick deep into home territory helped by a number of penalties conceded.

Marking his return, Piccaver burst through the visitors’ initial defence on the half way line, using his strength and speed to go clear.

With the try line fast approaching, the visitors were finally able to tackle Piccaver to the ground, but Haighton followed up to go over for a converted try that extended Spalding’s narrow lead to 12 points.

Changes followed, as Macaulay Crane replaced Anker in the pack and shortly captain Brown took a knock in a tackle while stopping a Queens counter attack, meaning he was replaced by Jorrit Schrauwers, with Piccaver dropping into the backs.

Ben Shields, at full-back, was being tested by Queens with their kicks downwind – meaning both Spalding wingers Callum Lewis and Alan Charevicius were spending more time in deep positions in support.

Queens then caused Spalding to have a nervous last ten minutes as they scored a try, knowing that a further converted score would secure them an unlikely draw.

Town’s defence held firm to secure their second league win of the season though –and with other results going their way, moved them a couple of places up the league table with their victory.

Spalding’s next league game is at mid-table Rushden and Higham, while this weekend they are without a fixture. Town had been due to be an NLD Cup match against Bourne, but they are involved in an RFU Cup game – which takes precidence.