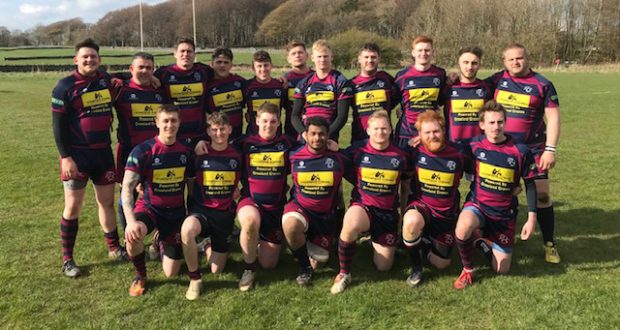 In the last minute of the season, Gav Sharman squeezed over in the corner for his 25th try of the campaign – and, with rivals Belper surprisingly beaten by Sleaford, Town were able to toast their best league finish for some time.

This was a game of two halves with the Elephants in control of affairs in the first half and Bakewell, with nothing to lose, stormed back and in the dying minutes threatening to spoil their celebrations.

Straight from the kick-off by Bakewell, Spalding moved the ball quickly out to their backs to captain Dan Adams who, with his strong running, broke two tackles, cut back inside the next attempted tackle and had just about had enough leg power to score under the posts with Conall Mason converting.

Bakewell then joined in the fun and, from open play, they had a converted try with only five minutes having elapsed.

Sensibly, Town then capitalised on a penalty kick as Shields ran from the half way line and left defenders in his wake.

The end-of-season spirit continued as Bakewell miskicked a clearance, with Sharman catching and cutting back inside.

From the breakdown the ball was moved swiftly by scrum-half Ben Shields to fly half Mason onto Adams who again cut a line straight through Bakewell and another converted try.

Bakewell’s forwards were doing well in the lineout and were building momentum in the scrums. And, with a lineout on Spalding’s five metre line, a driving maul was established and with a deliberate collapse a penalty try was awarded.

The final play of the first half saw Mason land another penalty kick and at half time Town appeared to have a comfortable 20-point lead.

Within the first two minutes of the restart right wing Sam Forrest caught a long clearance punt downfield by the home team and weaved passed the struggling home defenders to score under the posts for a converted try.

But back came Bakewell. Using a kicking game intelligently to gain territory with their dominance of the lineout, their left wing was at the end of a flowing move.

The home number eight was starting to make a real impression with his carries and, on the 60-minute mark, forceful forward play brought up another try.

In the final ten minutes the ball was moved along the backs by Bakewell creating an overlap for their left wing and minutes later a pushover try meant there was only a seven point difference and all to play for.

A clearance kick to touch, an unexpected lineout win and Ash Piccaver, having come on as a sub, along with Crane MaCauley and Liam Adams, broke clear.

With a ruck now established on Bakewell’s five metre line, the ball was moved on by outside centre Reece Callaby to Sharman who just made the line to shut out Bakewell’s impressive revival and clinch an impressive victory.