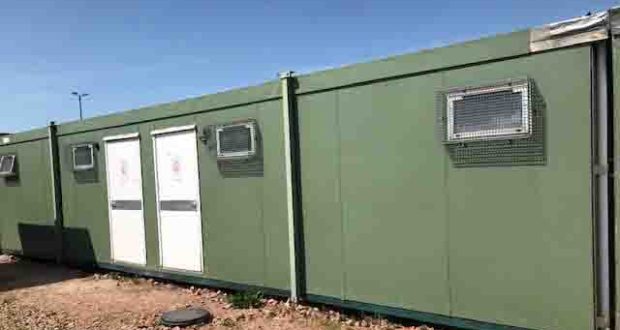 LOOKING FOR A GOOD HOME: Spalding RFC's modular changing rooms are to be donated.

Generous Spalding RFC are looking to help out another sporting club by way of donating their modular changing rooms.

Town purchased the dressing rooms in 2013 as they announced plans to move to their new base at Drain Bank North – and they were also used at their temporary Low Fulney site before their move to the new permanent home.

With work soon to begin on a new purpose-built changing rooms, the Elephants are offering to donate their old facilities to any clubs that may need them.

Chairman John Constable wants the club to support the local community and is encouraging clubs to get in touch with him.

Constable said: “The club will soon be instructing builders to construct new purpose-built changing rooms and we would like to see the modular changing rooms find new homes if there was a local sports club that could benefit.

“They are fully equipped with boiler, lighting, etc, plus either a referee changing room or toilet facilities and have been in regular use until the end of the season.

“We are keen to support the local sporting community and we will be pleased to donate them to either one or two clubs in need.”

Constable can be contacted by email at jfc1063@gmail.com for further information and/or to arrange a viewing.