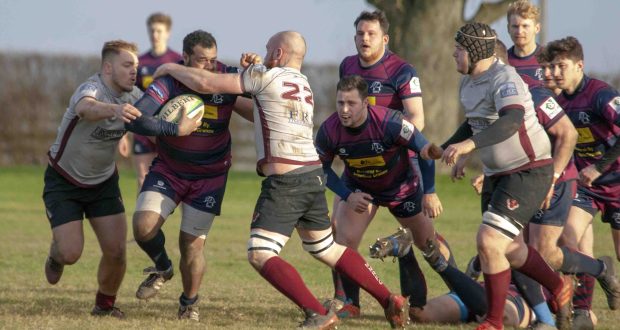 AWAY LOSS: Ash Anker in action at Melton. Photos by ADRIAN SMITH

Spalding RFC’s two-game winning streak in Midlands Three East (South) came to an end on Saturday as they went down 39-17 at Melton Mowbray.

Town were literally blown away in the first half as they unable to adapt their game plan to the windy conditions, while Melton played their cards right to run out winners.

The home team’s simple plan was to kick downfield using the strong wind to carry the ball an extra 20 to 30 metres or so, and to chase it down.

Within three minutes of the start, this strategy brought instant results, with a kick downfield. Spalding’s forwards secured the ball, inside their 22, made a couple of carries before scrum-half Ben Shields passed back to fly-half Conall Mason to clear.

Wind held the ball up with no distance gained to touch, allowing Melton the ball from a lineout – and a driving maul secured the opening try.

Five minutes later Spalding lost possession inside Melton’s half and a huge kick downfield turned Spalding’s backs, to chase back.

George Douglas picked the ball up in his goal area with two Melton running to close him down and, with his clearance kick charged down, the second home try was scored after eight minutes.

The hosts continued this winning tactic of kicking downfield either to touch or pressing Town, giving them little opportunity to get into the game. Spalding were also rubbing up the referee with a number of penalties, so even when they mounted an attack the ball was turned over.

The home team were starting to use their forwards very effectively, with powerful pick and drives and they were soon over for a 17-point lead.

Town pressed forward looking for a way back, but Shields was yellow carded for a rather innocuous offence of not releasing the ball in a ruck.

A hammer blow followed as, with Spalding on the attack after good carries from Pete Waudby and Harry Cole, the ball was turned over and from deep in their own half Melton counter attacked down the right wing to score a converted try.

Spalding responded with their opening try as the forwards gained territory, won a penalty which Mason sent to the corner and Ash Anker drove over the try line from the lineout.

But there was an instant response from Melton, as Town were caught deep in their half, and they used their scrum from five metres out to go powerfully over the line.

With the first half about to conclude, the away side were finally able to mount a backs attack with Taylor Crowson creating the opening for Gav Sharman to slice open Melton’s defence and score.

With the wind behind them in the second half, Spalding were not out of the game – and they scored again when the backs moved the ball quickly along the line for Sharman to grab his second.

That closed Melton’s lead to only 12 points with 30 minutes left to play.

However, Spalding failed to follow, Melton’s example of using the wind to kick for territory and instead tried to play it through the forwards.

But the hosts were fully up for the challenge and it was they who scored two further tries to end a rather disappointing second half for the visitors.

Spalding are without a game this weekend, but are next in league action at home to Northampton Men’s Own on February 12.