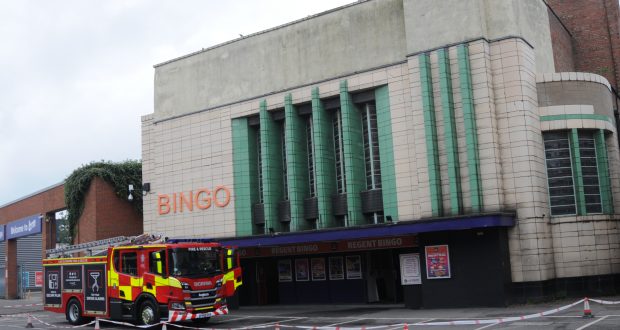 The scene this morning.

Fire crews are this morning dampening down after a fire at the Regent Bingo hall in Westlode Street, Spalding.

Crews from Spalding, Donington and Bourne were called to the scene around 3.30am today (Friday, May 14.)

A spokesman for the fire service said that there had been ‘significant damage to the inside of the building, fire investigation is ongoing in liaison with the management of the building’.

An electrical fault is thought to be responsible.

The Regent Bingo Hall has been opened since 1937 and had undergone a refit in 2018. It’s operated by Majestic Bingo Limited.

The Voice has tried to contact owners Majestic Bingo but has not received a response as yet.