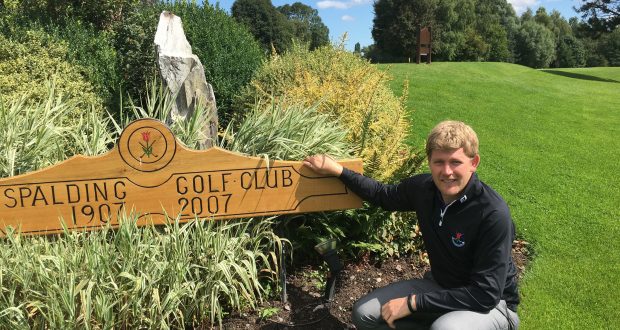 Spalding's Adam Keogh after being given the PGA Midlands Professional of the year.

Spalding Golf Club’s professional Adam Keogh is to leave the club for a prestigious new appointment.

The 32-year-old has spent eight successful years with the Spalding establishment but is moving on at the end of May.

He’s taking up the role of head coach and academy manager at Woodhall Spa Golf Club which is home to The National Golf Centre and the English Golf Union.

Players at Spalding are full of praise for Adam for whom it was his first club as a professional after having a promising playing career curtailed by injuries.

“I began playing when I was 12 and quickly became obsessed with the game,” he said. “By the time I was about 16 it became my long term ambition to make a career out of it.

“I don’t think I was a natural and I would say becoming a professional is down to my development and the number of hours spent practicing, though there must be some talent there.

“Nobody else in my family played the game.”

After coming through the ranks at Boston West, Adam began making England national squads at the first time aged 20, but injury meant he had to give up playing just a few years later.

The job at Spalding though provided an opportunity to realise his ambition for coaching others.

“It’s been a whirlwind,” he said. “Everyone at Spalding has been fantastic and it’s been a brilliant experience.

“From day one they took me in as one of their own.

“I’ve taken on a degree here and it’s been great doing what I do, teaching, playing and managing the retail side.

“It was quite daunting coming in for my first job but I’ve been treated fantastically.

“I think my long term ambition is to be the best possible golf coach I can be.

“One of the fantastic parts of the job at Spalding was seeing the development of some of the juniors, working very hard and going through the ranks – even a few going on to represent the national squads and go on to take on a scholarship in the United States.”