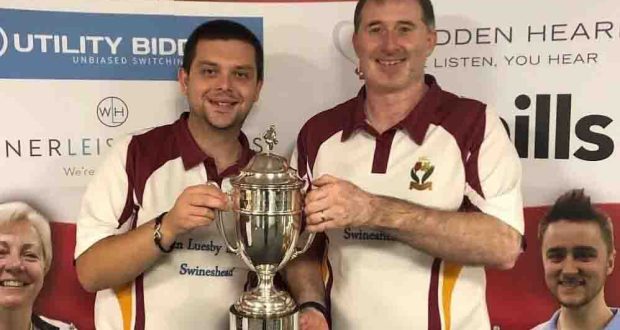 The national qualifiers were disappointed when COVID-19 struck and the 2019/20 finals could not go ahead – but they were able to be completed at Nottingham Indoor Bowls Club last week.

And, after an impressive run to the final, they clinched the crown in the most dramatic way possible with an extra-end success.

In the last 16, Spalding’s Harris and Smith beat Whiteknight’s Carl Brooks and Paul Maynard 18-13, before an extremely comfortable quarter-final win against Jason Norris and Tim Houghton from Blackpool Newton Hall (25-13).

This set up a semi-final clash with the home favourites, skipped by former world pairs champion, Simon Skelton.

The Spalding pair showed no early nerves as they raced into a 7-2 lead before Skelton and his partner narrowly took the lead 13-10 at 12 ends.

A couple of big counts helped Harris and Smith take a 20-14 lead, before closing out a 22-18 victory and set up an eagerly-anticipated clash with yet another former world champion in Nicky Brett and his partner, Lewis Baker, from Huntingdon.

Baker and Brett actually won this title back in 2016/17, so it was always likely to be a closely contested affair – and that proved to be exactly the case.

Harris and Smith were the early pace setters as they took a 13-6 lead. However, 12 shots in four ends saw the Huntingdon pair lead 18-13.

The Spalding boys showed incredible grit and determination, though, as they moved into a 21-18 lead going in to the last end.

Baker and Brett played a very good end which saw them holding the four shots they needed for the title with Smith’s last bowl in hand.

Fortunately, Smith managed to move the jack far enough to only drop three shots and set up an extra end finale.

The men’s pairs was part of the last session so a final with an extra end seemed like a fitting conclusion to the championships.

Harris and Smith were always in control of the extra end as they held their nerve to lift the national pairs title.

It was an extra special moment for Harris as he won his maiden national title, while Smith added the pairs title to his already impressive CV.

They will now represent England at the British Isles Championships in Belfast in March 2022.

The main damage was done at home by the rink skipped by Jordan Philpott, with Ruby Hill and Lewis Parnell, who won 25-9.

Parnell, Louise Harris and Dominic McVittie all made their debuts for the club.

Next up are Melton on November 7.

Spalding put in a strong showing and won on five of the six rinks and by an overall score of 116-69.

The top winning rink was Edna Perkins, Alan Tokley and Trish Stafford, who had an impressive 29-3 rink win.

Tokley was also captaining the friendly team for the first time.