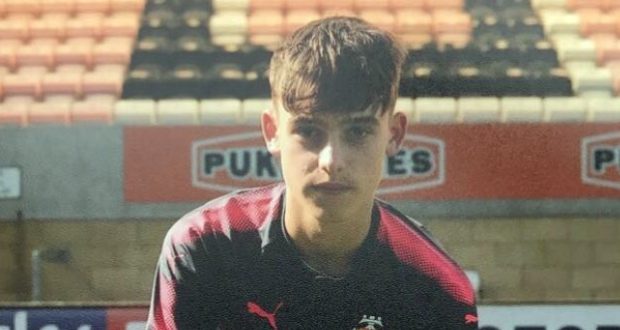 Talented teenage goalkeeper Jonah Gill is hoping to take the next step in his footballing career after securing the number one jersey for Cambridge United under-16s, writes James Clark.

The South Holland stopper, who has been with Cambridge for six years, is bidding to make his mark with the first team in the coming years.

The young keeper started his footballing career at Wisbech St Mary at the age of seven. Gill, who was playing against local teams such as Holbeach United and Spalding United, always knew that football was something he wanted to do.

His manager at St Mary knew that Gill was special and, before long, Gill moved on to King’s Lynn Town for a couple of seasons.

However, he didn’t get the opportunities he was looking for at Lynn – and that’s when he moved on to Arsenal Soccer School, a team that was local and had all of the best players in the area.

Gill performed exceptionally well in the two seasons he had there, something that was recognised when he went to play at the Cambridge tournament for his club and caught the eye of The U’s scouts.

The goalkeeper has blossomed at Cambridge ever since as an under-11 and impressed the coaches so much that he was offered a scholarship at the club.

Gill, now 15-years-old, has been playing as the keeper for the under-15s – but has also managed the amazing achievement of claiming the number one shirt for the under-16s as well.

Along the way he’s rubbed shoulders with the likes of Dion Rankine, who was at Cambridge and has now signed for Premier League side Chelsea.

“My aim is to make it into the first team of Cambridge United,” said Gill, who also plays cricket for Spalding Town. “I would really like to make a career out of football whether its playing or even coaching, as long as I’m involved with the sport.

“It’s always been an aim for me to play professionally, and if I made the first team that would be a real highlight for me.

“Obviously, it was amazing to play for the under-16s and I’m just going to carry on playing and see where my career takes me”