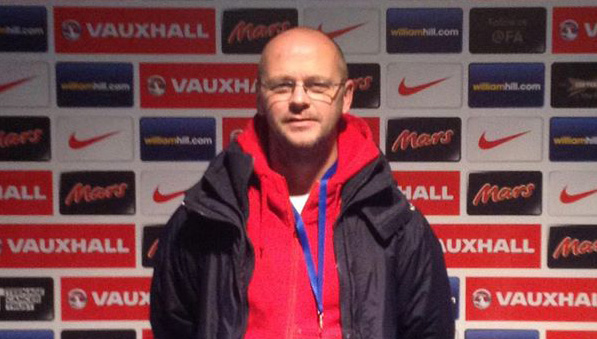 One of the finest and most enduring players on the local football scene has had his final competitive match.

Holbeach United legend Steve “Oddie” Barnes announced his retirement on Saturday, March 26 soon after the season was declared null and void for the vast majority of non-league teams due to the coronavirus pandemic.

But the 44-year-old is just thankful he was here to play a significant role in Holbeach United Sports’ successful season, after suffering a heart attack during a Tigers Reserves match just over a year ago.

Within 24 hours he’d had a stent fitted and the very many people who know him were not surprised that he was determined to play again for one final hurrah.

With a United Counties League Premier Division winner’s medal and three Saturday and Sunday Lincs Cup medals to cherish, Oddie can look back on his time with a good deal of pride and pleasure.

“I’ve enjoyed my career,” he said. “Now it’s time to not sit back but watch the continued development of the young players at the club. That’s what gives me satisfaction now.”

Those youngsters are learning from someone who knows what it’s like to try and make a mark.

Oddie’s first-team debut came at Carter’s Park at just 16 years old – and the diminutive midfielder had little time to think about it.

He recalls: “I was on the sofa at home one Saturday lunchtime and just about to watch Saint and Greavsie when Lefty (stalwart clubman Alan Wright) rang and said they needed someone else on the bench that afternoon.

“I got on that day – not for long – on the right wing. I can’t remember who it was against or whether we won. Mick Jones was the manager and must have been happy with what I did because I stayed in the squad from then on.”

And so this launched an adult playing career which often saw him playing 60 or more matches per season on Saturdays and Sundays. Oddie had a voracious appetite for football and admits that he could not get enough.

The first silverware came when the Tigers dramatically upset the odds to win the Lincs Cup with a 1-0 defeat of Boston Town at the Sir Halley Stewart Playing Field in March 1995.

Oddie is known for loyalty to his hometown club. He had half a season at Spalding United under Alan Day before Steve Evans took him to Stamford for the remainder.

Back at Carter’s Park, though, Holbeach were seriously struggling as a club and Oddie jumped at the chance to return and play for new management duo Andy Gray (one of his best friends) and Linden Secker. They were, in Oddie’s words, “dark days”.

However, the club crawled on and was rewarded in 2003 when the Tigers won the UCL title under manager Dick Creasey. It was an astonishing achievement, having been 28 points behind leaders Newport Pagnell Town at Christmas but clinching the championship with a little to spare.

Oddie said: “It was fantastic because Holbeach hadn’t won the title for some time. A lot of those games we would be losing but come back to win. We had a never-say-die attitude and never thought we were out of a game.”

When Creasey quit to join Spalding United, many of the squad followed and won a second consecutive UCL title. Oddie wasn’t asked to be one of them but insists he wouldn’t have gone anyway.

Along with new manager Shaun Keeble and Ian Dunn – now Pinchbeck United boss – Oddie set about steadying the Holbeach ship once more. In later seasons he had a short, unhappy spell at Moulton Harrox in the Peterborough and District League Premier Division before a couple of years at Leverington Sports.

But again the lure of Carter’s Park was too great and he returned to become player/assistant manager of the Reserves. Elder brother Phil succeeded Omar Joof as manager and the siblings – having played alongside each other in midfield for so many years – were now a management partnership.

Then came that worrying heart attack at Peterborough side Polonia on January last year. Oddie recalls: “I remember running into a big defender and really feeling it so I’m not sure if that sparked something. Phil subbed me because I was playing awful. When I came off the pitch I didn’t feel right – I couldn’t eat or drink and my arms ached.”

A stent fitted the following day made the father-of-two immediately feel “like a new man”.

Doctors encouraged him to keep active and Oddie vowed that this would be his last season, it’s just the abrupt curtailment which has left him disappointed.

Sports were on well on course for promotion and, in his eyes, that would have been the perfect way for him to sign off.

He said: “The Sports team was unbeaten in the league and I would have loved nothing more than to see the boys promoted.

“They deserved it and it would have been very nice to have ended my career that way. I feel like it’s unfinished business.”

After a career covering 28 years, a 1-1 draw at Parson Drove Reserves in early March was perhaps not how he intended to bring down the curtain.

FAVOURITE MATCH: midweek league match v Blackstones in mid-2000s. My first and only hat-trick in the UCL. I scored from open play, scored a penalty and missed a second. Then late on, Tom Gosling was brought down and we got a penalty. I wasn’t sure about taking it after missing one but I scored with it.

FAVOURITE GOAL: one of two I scored away at Wootton Blue Cross in 1995. The report said I picked the ball up 30 yards out, took on two players and chipped the keeper. The headline was Barnes storm wreaks havoc.

FAVOURITE GROUND: Carter’s Park. There’s nothing to beat a midweek game under the lights there, especially if it was a derby with the Pig Pen full. The best ground I’ve played at is Lincoln City’s Sincil Bank.

FAVOURITE MANAGER: Dick Creasey. His team talks left nothing uncovered and he was such a good motivator. Whether it was a rollicking or an arm around the shoulder, he knew how to get the best out of his players. Some managers don’t like to mix with players but he was good in the bar.

FAVOURITE PLAYER: Milton Graham. A real talent – you couldn’t get near him in midfield. He would turn a game with sheer brilliance.

BIGGEST INFLUENCE: My dad, Barry. To be able to follow someone who had such a good career in non-league himself was special. If I made him proud then that’s good enough for me.

MOST UNDERRATED PLAYER: Andy Gray and my brother, Phil. Whether the team was playing well or badly, they were both consistent. Both really good at getting a tackle in, winning the ball and passing it. They did the simple things well and were a consistent 7/10 every week.

PLAYER WHO SHOULD HAVE GONE HIGHER: Ronnie Fortune. What a player. Small like me but a great first touch and I’ve never seen a player go by others like him. He was unbelievable and with a bit more application could have done so well.

Midfield maestro Barnes, known as Oddie, has opted to hang up his boots after nearly three decades on the South Holland footballing scene.

Danny Hussey, who has just stepped down as Tigers boss, brother and Holbeach Reserves manager Phil Barnes and former UCL winning boss Dick Creasey have all given glowing references to the much-respected veteran.

Former Tigers manager and team-mate Hussey said: “I’ve known Oddie since the early 80s and we’ve grown up to be best mates.

“We’ve played football together from our youth through to men’s football at different clubs.

“He’s been a tremendous friend and a really great player – good feet, great passer and could score some great goals.

“He’s had a great career but it won’t end, I can see him passing his knowledge to those young Oddie Barnes’ coming through the youth system.

“He’s up there as a Holbeach legend in my eyes and he can be really proud of his achievements and the way he’s presented himself throughout his footballing days.

“He remains a good friend and I wish him all the best.”

Brother and Holbeach United Reserves manager Phil Barnes added: “Not being too biased, I think he’s been one of the best local players of the last 15 to 20 years.

“He could play right midfield, centre midfield and as a forward, his vision and passing ability was quality.

“He was also a winner, loved the game so much, that’s why he played so long, and even after his heart attack, he still wanted to play.

“I’m proud of his achievements in local football and proud to call him my brother and best mate.”

Tigers UCL-winning manager Creasey concluded: “He’s a Holbeach boy and a Tigers boy. Oddie’s not only a good footballer but a lovely lad as well. He played a massive part in Holbeach winning the league that year.

“I’ve got a lot of time for both of the Barnes boys and they come from a good family.”