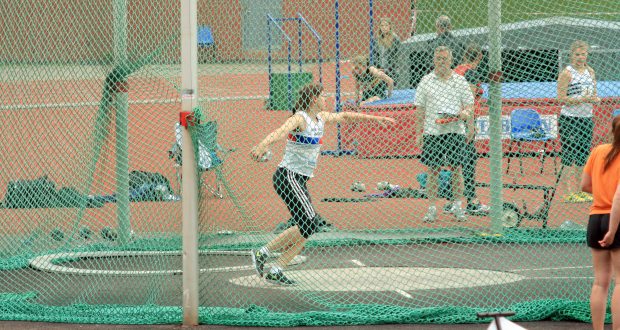 WINNER: Andrea Jenkins was one of only a handful of event winners for Nene Valley.

A new chapter in the Nene Valley Harriers story was written when the club won promotion from the UK Women’s Athletic League Division Three in their first season of national level competition.

Having led the league going into the season’s finale at Lee Valley the Harriers had a fighting chance of winning the division.

They can look forward to a step up in standard and even tougher in Division Two next season.

The day was all about team work – with the only first places coming from Andrea Jenkins (discus) with a distance of 36.15m, B hammer thrower Kelly Lawrence (40.13m),

Priscilla Dadziea in the B shot (10.60m) and team captain Devon Spencer, winner of the pole vault (2.50m clearance).

Rosie Jacobs took part in three events, with the highlight being her second place in the 400m hurdles.

That feat was emulated by Andrea Jenkins with the runners-up spot in the hammer to add to her discus win.

A number of other athletes doubled up, with Emily Maltby achieving second place in the long jump with 5.28m.

She was also second in the triple jump with a fine 10.91m leap.

With a relatively youthful team, Nene Valley will hope to make their mark on Division Two next season.

The men were in British League Division Three action at Nottingham – a fixture which had something of an end of season feel to it.

Nene Valley finished last out of the six competing teams, but their place in the division was safe going into the fixture.

Martin Tinkler was the only individual winner with a shot put of 14.50m.