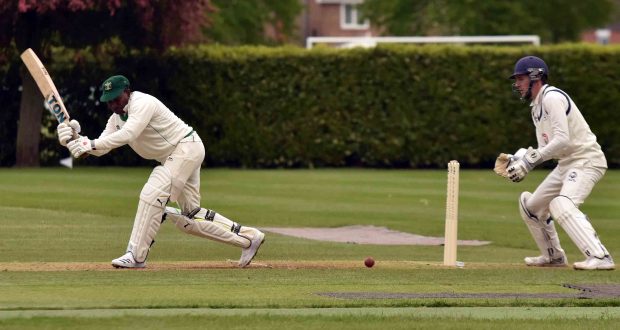 Nilantha Atapattu took fine figures of 5-17 as Spalding Town picked up a 31-run victory at Freiston on Saturday.

Spalding’s fourth win of the season, which was also inspired by fine knocks from Chris Dring (47) and Ben Smith (45), moves them to within 11 points of third place in the South Lincs and Border League Premier Division.

After being put into bat first, Town found themselves in a spot of bother at 31-3 after losing Jon Manton (10), Ollie Dring (3) and Atapattu (2) cheaply.

That brought Jay White and captain Chris Dring to the crease, as they set about rebuilding the innings.
Indeed, the duo put on 49 before White was caught and bowled by Abdul Moeed (4-42) for a handy 26.

Ethan Lawrence (3) also fell to Moeed, but Smith joined his skipper at the crease and stepped on the accelerator.

Although Chris Dring fell three runs shy of his 50 (Moeed again the bowler), Smith smacked a six and three fours as he and Josh Lawrence (14) put on 45 for the seventh wicket.

With Smith departing one big shot away from his half-century, Spalding were unable to bat out their alotted overs and ended on 175 all out in 42 overs.

Freiston’s reply was dominated by strong scores from Moeed (53) and Sunil Panjwani (30), with no others managing double figures.

That was down to a strong bowling display from the Town attack, with Atapattu the stand-out.

The win leaves Spalding fifth in the standings – and now within striking distance of rivals Long Sutton after they suffered a second-successive defeat.

Sutton slipped up at title rivals Sleaford 2nd, who handed them a six-wicket reverse.

The South Holland side won the toss and opted to bat first – but could only muster a total of 104 after being bowled out in 28 overs.

Dan Oldfield and Jamie Taylor both scored 18, while Barry Stanway blasted 35 from 31 balls in the middle order to ensure Sutton at least took their score past 100. The ever-impressive Simpson (2-11) and Stanway (1-19) got amongst the wickets as the visitors attempted to pull off an unlikely victory, but Sleaford eased home.

Also beaten in the top tier were Moulton Harrox, who went down by six wickets at Market Deeping 2nd.
Harrox skipper Chris Beale won the toss and decided to bat, with his side posting a watchful 156-5 from their 45 overs.

It was something of a team effort, but the best contributions came from Tom Wilson (58 not out from 125 balls) and Alin Carter (44).

Harrox finished with five points and are sitting ninth in the 12-team top tier.