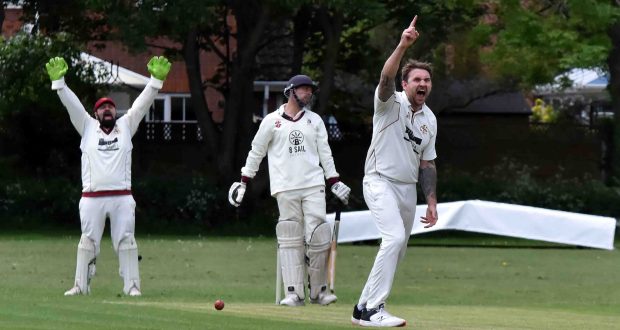 HOW IS THAT? Barry Stanway celebrates after taking one of his five wickets. Photo by JAKE WHITELEY

The hosts opted to bat first after winning the toss, but were soon skittled out for 109 in 25.5 overs by an inspired Sutton.

Sutton’s reply was a confident one, with opener Adam Wright (48 not out) leading from the front.

The victory gave Sutton maximum points and keeps them third in the table, 13 points off top spot.

At the other end of the table, Moulton Harrox have dropped into the bottom two after suffering a five-wicket defeat at top-of-the-table Newborough.

After being thrown into bat by their high-flying hosts, Moulton endured a tough time with the bat and were bowled out for just 75 in the 30th over.

Mohammad Alam (16) was their only player to make double figures, with Shiva Teekasingh (4-16) the chief destroyer.

More defeats for South Holland sides came in Division One, with Spalding 2nd and Moulton Harrox 2nd on the receiving end.

Robert Seymour took 5-14 for Spalding 2nd against Grantham 3rd as they bowled them out for 82 at Seas End Hall.

But Town were all out for just 50 in reply, with Jack Bowser (14) top scoring.

In reply, only Cameron Fox (19 not out) made double figures as Harrox 2nd were all out for 71.