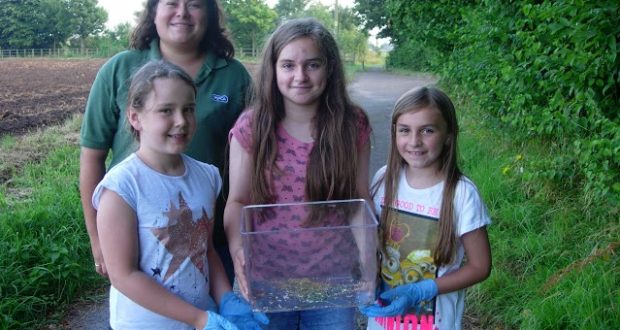 Sisters help return baby vole they saved back to the wild

Animal-loving sisters who saved the life of a tiny baby vole were delighted to be the ones to release it back into the wild after it was nursed back to health by an animal charity.

Megan Hayes (13), and her nine-year-old sister Daisy were on their way home from school when they found the little bank vole – later named Alex – in Holbeach on July 11.
They were worried about the tiny vole, who was so young he still had his eyes closed, so they moved him out of the road in the hope his mum would return.
But, when she didn’t, they scooped him up in a box and took him home to call animal welfare officers at the RSPCA animal charity.
Inspector Justin Stubbs collected Alex the following day and took him to East Winch Wildlife Centre, in Norfolk, for expert care.
Inspector Stubbs said: “Megan and Daisy almost certainly saved Alex’s life by finding him and taking him to a place of safety so I’d like to say a big well done to them all.
“If anyone comes across a wild animal they believe is injured or sick then we would advise them to call the RSPCA’s emergency 24-hour line for advice on 0300 1234 999.
“Sometimes it can be faster to take the animal to a vet or local wildlife centre yourself, as our officers may be tied up dealing with other calls.
“However, if you can’t transport the animal, please get in touch.”
Wildlife assistant Alice West spent almost three weeks caring for little Alex until he weighed a healthy 15g and was well enough to be released.
And Alice decided she had to invite his rescuers along to see him run off into the wild, so Megan and Daisy watched as the rodent was released.
Alison Charles, manager at East Winch Wildlife Centre, said: “The girls decided to call the vole Alex and very kindly sent in a donation to cover the cost of his care, which was really sweet.
“So it was only right that they – the people who undoubtedly saved his little life – got to see him released back into the wild.”
Megan and Daisy’s mum, Paula, said: “Alex was very wet and bedraggled when we found him.
“We called the local vet and they told us to get in touch with the RSPCA.
“It was fantastic for the girls to be able to see him released into the wild.”