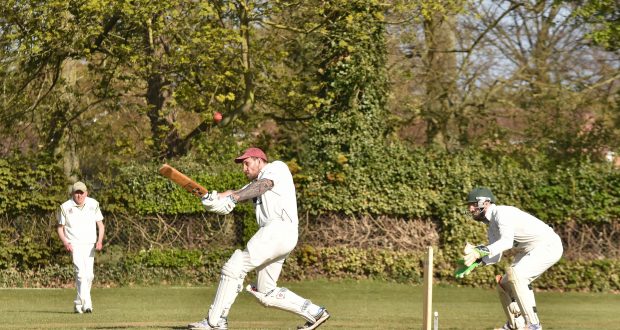 ON THE CHARGE: Sutton's Barry Stanway was in fine form. All three photos by JAKE WHITELEY

Rob Simpson claimed seven wickets on Saturday as Long Sutton made it two wins from as many games in the South Lincs and Border League Premier Division.

Spinner Simpson (7-17) starred as Sutton blew Market Deeping 2nd away for 136 at Paradise Field, before the hosts chased down their target in just 20.1 overs with six wickets to spare.

The other home wickets came from Barry Stanway, Adam Whitaker and Jake Burton as Deeping were made to rue winning the toss and opting to bat.

Although Sutton were without last week’s hero Josh Baker, they made light work of their target despite losing a few early wickets.

Skipper Dan Oldfield caught the eye with a rapid 28, while some big hitting from Barry Stanway and Jamie Taylor eased the hosts to 140-4 and 20 points.

It wasn’t such a good day for Spalding Town and Moulton Harrox in the top flight, however.
Spalding suffered their second loss in three games as Sleaford 2nd handed them a 75-run defeat at Seas End Hall.

Despite figures of 4-29 from Nilantha Atapattu, Sleaford managed 185-8 from their 45 overs with Dan Hutson (41) top scoring.

However, once both were dismissed there was something of collapse – with number ten Harry DeCamps (23 not out) and number eight Brandon Andrews (11) the only others to make double figures as they were bowled out for just 110.
Harrox, meanwhile, suffered a six-wicket home defeat against Boston 2nd.

* In Division One, Spalding 2nd suffered a crushing 277-run loss at Newborough.
David Cooper (207) and Andrew Rowland (102 not out) put Town to the sword as the hosts made a huge 343-1, before Spalding were knocked over for just 66.

* Spaldng 3rd enjoyed a five-wicket victory at Heckington in Division Two on Sunday. Theo Gompertz (3-14) starred with the ball as Town bowled their rivals out for 70, before Michael Morris’ unbeaten 25 steered them to 73-5 in reply.
In the same division, Joe Whitaker’s 17 not out and 3-51 couldn’t stop Long Sutton 2nd (70) losing to Belton Park 2nd (195-8).