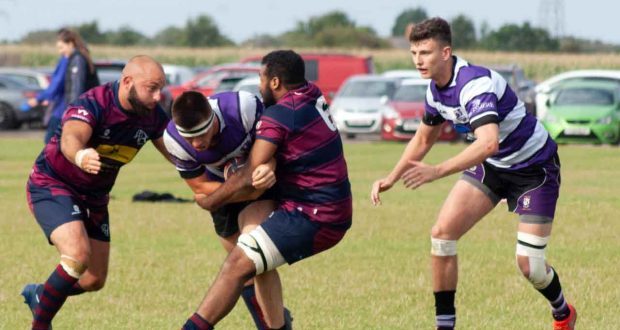 In-form Spalding RFC marched into the semi-finals of the Midlands Section of the National RFU Vase Cup with a 26-16 win at Manor Park on Saturday.

Town, who are hitting top form after a tricky start, took the lead on six minutes and never looked back against their Nuneaton hosts.

Electing to play with the slope advantage in the first half, the Elephants immediately impressed the home supporters with the way they were retaining possession, setting up rucks and quickly recycling the ball through the forwards.

Flanker Harry Cole, using his pace and power, created an opening after six minutes through the middle. When tackled, Ash Anker continued the momentum and scored under the posts, with Conall Mason converting.

Manor Park possessed a strong pack of forwards, but Spalding never let them get on top. Luke Turner was caught obstructing play around the tackle area, with the penalty kick converted.

Ten minutes later Town were penalised for holding onto the ball after a tackle and another good long range penalty brought the home team back into the match.

Spalding’s lineout was working well, with Anker supplying scrum-half Wilson Taylor with a good ball. And from one of these lineouts, after 30 minutes, Harry Sharman broke free to score under the posts for a converted try.

The home team had further chances to reduce the lead as the referee was strictly managing the breakdown, awarding two penalties in quick succession.

One kick hit the upright, but the second sailed through – reducing the lead to five points.

Town established themselves deep in Manor Park’s 22 and a ruck was established with Sharman acting as scrum-half. He spotted no guard defence and waltzed in unopposed under the posts for his second try.

With another successful conversion, the referee blew for half-time with Spalding leading 21-9.

Manor Park upped their game after the break, with some big carries – especially from their number eight and the right winger.

But Spalding’s defence held firm, led by skipper Dan Adams storming into every tackle. He was well supported by fly-half Mason, who was having another good game, as was Willis Ingleby in the backs.

With the home team making little headway, frustration built up and their lock was red carded for a highly dangerous shoulder charge that connected with Anker’s head.

There was, however, also a yellow for Turner after his reaction.

Both teams lost concentration for the next ten minutes, with both Sharman and Da Silva receiving yellow cards, as well as a home player.

But it was the home team who capitalised as they became encamped in Spalding’s half. A strong scrum, followed by a quick tap penalty, caught Town napping and again the lead was cut back to five points.

Both away wings then started to find space and Callum Lewis featured as he safely gathered several high kicks and counter-attacked.

But it was a superb kick by Mason, deep into open space, that saw Gav Sharman race down his wing, outpace the defence and go over for Spalding’s fourth try of the afternoon to seal a deserved away win.

Next up for Town is a derby date with rivals Stamford in Midlands Three East (South).

Sixth-placed Spalding will host the battle with table-topping Stamford at the Memorial Field on Saturday (2.15pm).