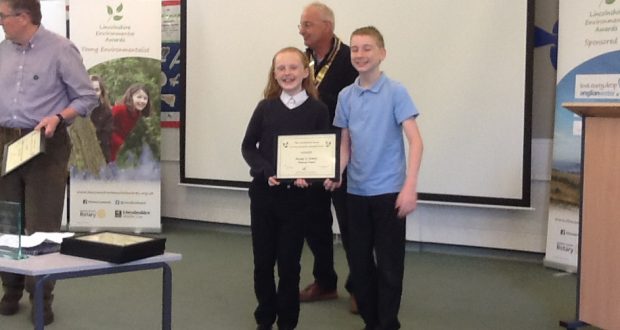 School reels in the awards

A host of Deeping St Nicholas Primary School students have been celebrating winning top awards in a variety of areas.

Year Six pupils Georgina Jones and Benjamin Reynolds have picked up the Lincolnshire Young Environment Award for the school.

They travelled to Lincoln to make a presentation on what the school does for the environment to a judging panel recently.

The panel were wowed by their presentation and awarded them first prize, the money from which will go towards night cameras that will be set up to capture wildlife that visits the school after hours.

Adding to the gongs collected were Millie Fraser, Tilly Stapleton and Oscar Davies-Pharro who all won in Tesco Deeping Literary Festival’s competition to design a book cover depicting their favourite story or character.

The younger children have also been in the awards with years one and two, as well as the EYFS class, designing a poster to show the different aspects of life in Deeping St Nicholas.

A spokesman for the school said: “Our entry was chosen as the winning poster which was then displayed with pride in the store window.

“Congratulations to all our award winners.”