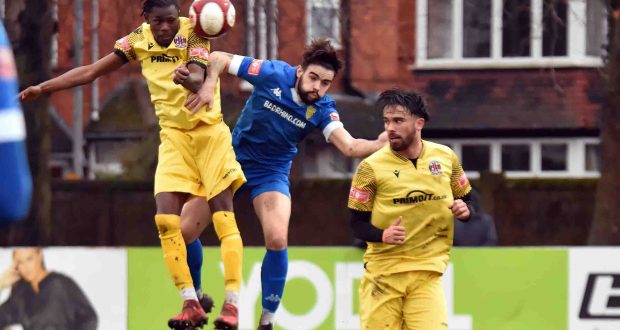 Spalding United slipped to their second defeat on the spin as they went down 2-1 at lowly Daventry Town on Saturday, while Pinchbeck United were thumped 5-1 at home by Gresley, Holbeach United saw their game postponed and Moulton Harrox thrashed Long Sutton Athletic 10-0.

Starting with the Tulips, they were surprisingly beaten at Pitching In NPL Midlands Division strugglers Daventry despite a first goal in blue for Dylan Edge.

Brett Whaley’s side, who handed a start to new signing Archie Jones, found themselves 1-0 down at half time thanks to Joel Nketia’s (30) strike at Elderstubbs.

Daventry soon doubled their lead through Jeff Woodward (49) early in the second half, but Edge struck back four minutes later to keep Spalding in the hunt.

But, despite Adam Confue seeing red for the hosts five minutes from time, the Tulips couldn’t find a leveller and slip to 12th in the standings.

In the Ulhsport UCL Premier Division North, Pinchbeck’s were on the receiving end of a heavy beating at home against title hopefuls Gresley.

The high-fliers went ahead on 20 minutes at the Sir Halley Stewart Playing Field when Kane Lee skipped past a few challenges and crossed for Steve Hart to slot home.

It was 2-0 on 57 minutes when Ryan Seal played a one-two with Hart before stabbing past Alex Smith, before Seal made it three from the penalty spot four minutes later.

The game was very much over on 65 minutes when Hart hammered a free-kick into the roof of the net, but Gresley weren’t done there as sub Corey Bucalossi made it five ten minutes from time with a curling finish.

Pinchbeck did grab a consolation in the final minute thanks to a deflected Krisztian Gagyi, but they stay two points clear of the drop zone and deep in the relegation mire.

Below them, basement side Holbeach United saw their home game against Heanor Town postponed due to a frozen pitch at Carter’s Park. They remain ten points from safety after 17th-placed Selston lost 3-1 to Deeping Rangers.

Down in the ChromaSport PDFL Premier Division, Moulton Harrox were at their ruthless best as they hammered rock-bottom South Holland rivals Long Sutton Athletic 10-0 at London Road.

The in-form Josh Ford made it back-to-back hat-tricks, while strike partner Declan Earth also helped himself to a treble.

Joe Townsend (2), Gary Chappell and an own goal completed the rout for third-placed Harrox, who also made it seven clean sheets on the spin.

Holbeach United Reserves got back to winning ways with a 1-0 triumph at Stamford Lions, while Crowland Town went down 1-0 at Seb Hayes’ Oakham United.

More on all of the games in Thursday’s Spalding Voice.