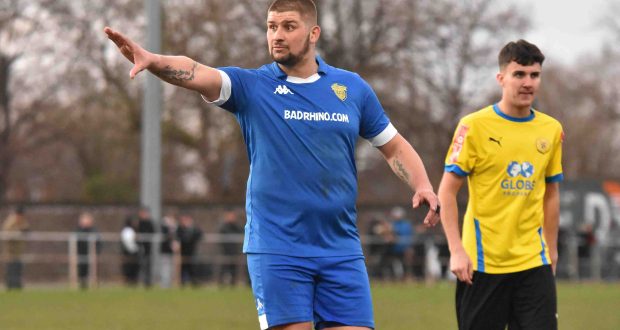 Spalding United were held to a 1-1 draw by lowly Sutton Coldfield Town on Saturday, while Holbeach United’s latest loss was a 3-2 home reverse against Leicester Nirvana.

In the Pitching In NPL Midlands Division, Spalding boss Brett Whaley wanted his side to shake off their season-long hoodoo of struggling against sides below them in the table.

However, Sutton Coldfield – who are 17th in the 20-team division – weren’t having any of that and took a 1-0 half-time lead through Leo Brown at the Sir Halley Stewart Playing Field.

That’s how it stayed up until the 81st minute, when defender Sam Cartwright levelled for the Tulips.

Gregg Smith also had a goal controversially ruled out as Spalding were forced to settle for a point that keeps them ninth in the table.

But Danny Clifton’s rock-bottom side once again showed their fighting spirt, as they turned a 3-0 scoreline into a much more respectable 3-2 defeat.

Goals from Deen Master (2) and Rheiss Mclean had Nirvana in cruise contol at Carter’s Park, but Lewis Baughan and Viliam Radic gave the home crowd something to cheer.

Pinchbeck United were not in action, but their relegation rivals Selston lost 2-0 at Anstey Nomads and now have just two games in hand on the Knights, who they are two points ahead of.

In the ChromaSport UCL Premier Division, all eyes were on the League Cup action.

Moutlon Harrox were held to a 0-0 draw by Division One leaders Warboys Town, while Tydd upset top tier side Oakham United 2-1.

But Crowland Town lost 3-0 at home to Stamford Belvedere and Pinchbeck United Reserves went down 2-1 at home to Whittlesey Athletic Reserves.