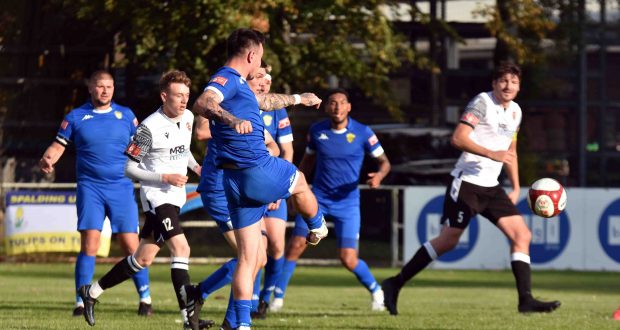 The Tulips, who were one of the few teams in Lincolnshire to get their game on due to the heavy rainfall, defeated Shepshed Dynamo 3-0 in the Pitching In NPL Midlands Division at the Sir Halley Stewart Playing Field.

All of the goals came in the final 20 minutes, with Jordan Macleod breaking the deadlock for Spalding (72) before Shepshed keeper Brandon Ganley sent off moments later conceding a penalty.

Top scorer Macleod picked himself up to bury the penalty, before Ben Starkie rounded off the win nine minutes from time.

The win, Spalding’s first since November 20, ends a five-game winless run and moves Whaley’s side up to 11th in the table.

Holbeach were due to face Sleaford Town at Carter’s Park, but that one was called off at around 1pm due to a waterlogged pitch.

Pinchbeck’s game at Boston Town was postponed much earlier, with the Poachers’ pitch deemed unsafe for play.

There was better news for Moulton Harrox, who marched into the semi-finals of the Lincs FA Junior Cup with a 2-0 victory at Pointon.

Josh Ford and Declan Earth got the goals for the team co-bossed by Bobby Patterson and Tim Cole.