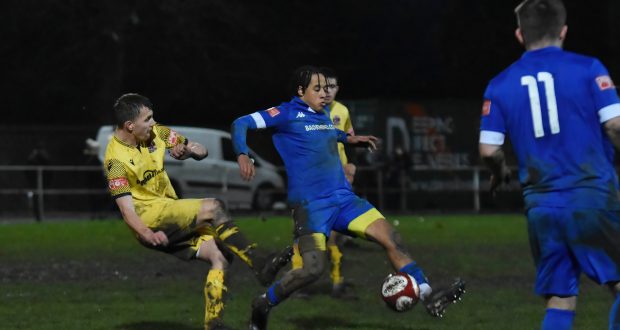 Both Spalding United and Pinchbeck United suffered 2-1 defeats on Saturday, but there was another impressive win from in-form Moulton Harrox.

Starting in the Pitching In NPL Midlands Division, Spalding suffered their first loss under boss Brett Whaley as they went down 2-1 at Cambridge City.

After a goalless first period, the hosts netted twice in ten second-half minutes through Jarid Robson (65) and Ryan Ingrey (75) to seize command.

The Tulips rallied and pulled a goal back when Ben Starkie struck four minutes from time, but the hosts held on to leapfrog Spalding in the table.

Indeed, the Tulips are now 12th in the standings after their ninth defeat of the campaign.

Kyle Wrenn gave the visitors a 1-0 lead at the break with a goal on 41 minutes, before they doubled their advantage through Louis Czerwak on the hour.

Pat Kacirek pulled one back for the Knights 11 minutes from time, but they couldn’t find a leveller.

Lewis Thorogood’s side remain two points clear of Selston just above the drop zone, but their rivals now have four games in hand.

In the ChromaSport PDFL Premier Division, red-hot Moulton Harrox romped to a 5-0 win at Stamford Lions and are now nine points off second-placed Stilton United with two games in hand.

A Josh Ford treble and strikes from Harry Machin and Gary Chappell got the job done for Bobby Patterson and Tim Cole’s side, who also kept a sixth successive clean sheet.

Also in the top tier, Long Sutton remain bottom after a 5-1 loss at Stamford Belvedere, Crowland Town were thumped 5-1 at leaders Uppingham Town and Holbeach Reserves went down 4-0 at home to Oundle.