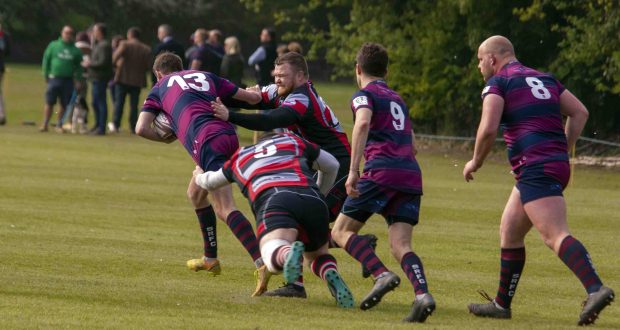 CATCH ME IF YOU CAN: Spalding move forward on Saturday. Photo by ADRIAN SMITH

The loss at the Memorial Field means that Town finish in the bottom two – which would normally mean relegation.

But, due to the COVID-19 pandemic, it is expected that there will be no promotion or relegation this season.

The Elephants do, however, expect that there will be some restructuring to take place over the summer that could reduce their travelling.

With the Dunstablians lying second in the league and Spalding second from bottom, the challenge was on to repeat their last home victory – when they knocked Bourne off second place.

Town welcomed back lock Ash Piccaver after a four-month absence and, together with fellow lock Jordan Templer, the pack was looking strong.

The opening minutes of the match saw both teams settling down, with well-organised defences, neutralising possession.

However, a striking feature was the unacceptable number of penalties conceded by Spalding, which in turn conceded possession and – with Dunstablians’ fullback Zach Bourne having a big kick – valuably won territory was being lost.

The visitors realised that Town’s forwards were well organised, led by captain Pete Waudby, with Ash Anker and Sam Noble in particular putting in some crunching tackles.

As Spalding started to use their backs, fly-half Conall Mason was called upon to put in a try-saving tackle after 11 minutes of play.

But it was Town’s backs who were next to impress, with centre Gav Sharman and left wing Callam Lewis combining to create space for full-back Jack Patrick to side step his way over the try line. With Mason converting, the hosts racked up a seven-point lead.

It did not take the visitors too long to respond, as they attacked through their backs to score out wide by the corner flag.

Dunstablians kept pressing and encamped themselves deep in Spalding’s 22, with Ben Shields needed to hold the ball up with another try saving tackle.

Pressure was telling and skipper Waudby, having been warned by the referee that the penalty count was becoming unacceptable, conceded a penalty himself and was shown a yellow card.

Noble moved up to the front row and centre George Brown slotted into the back row to keep the scrum competitive and Spalding were able to hang on until the half time whistle with a man short.

Within minutes of the restart Dustablians took the lead with a converted try and Spalding responded with Harry Brown coming off the bench to replace Tom Parker.

But penalties conceded were still hurting them, with a simple kick in front of the posts giving the visitors an eight point lead.

Alan Charvicius replaced Anker and the game became end to end, but Dunstablians still had the edge, especially gaining huge territory from more conceded penalties by the hosts – and they capitalised with a converted try again out wide.

Spalding responded with another good flowing move down the left, started by Mason with Gav Sharman and Lewis showing their speed and determination.

Forward Harry Brown finished things off with a powerful run from nearly the 22, reducing the away lead to just ten points.

Was a fight back on the cards? Again Dunstablians with confident handling, responded, killing off hope for Town by scoring in the left corner for a 15-point lead with ten minutes remain.

Spalding’s team spirit resulted in them battling back upfield and pressure resulted in a penalty awarded some ten yards from the try line.

A quick tap saw centre George Brown take a pass at speed and he broke through Dunstablians’ tackles to go over for a worthy try, which was converted by Mason for the last score of the season.

On the same day, Spalding 2nd side also lost to Dunstablians’ second string 42-31 on Saturday.