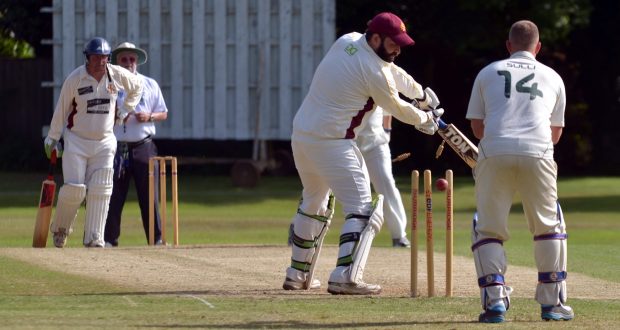 HOW IS THAT? Adam Wright is bowled by Ian Lund on Saturday. Photo by JAKE WHITELEY

Table-topping Long Sutton continued their charge towards the South Lincs and Border League title with a dominant nine-wicket win over Claypole on Saturday.

Rob Simpson (4-31) and Matt Bull (4-10) took four wickets apiece and Barry Stanway (2-26) bowled both openers as Claypole managed just 112 batting first, before Sutton skipper Phil Barnes made an unbeaten 58 to see his side to 115-1 in just under 20 overs.

Visitors Claypole opted to bat first at Paradise Field after winning the toss, but found the going pretty tricky.

Pace ace Stanway shattered Matt Ragless’ (2) stumps early on, then broke a 47-run partnership between James King (27) and Graham Revill (28) by clean bowling the former with the score on 55.

Simpson then trapped Revill LBW, before Dan Sullivan (19) and Ian Lund (16) dug in to push the score towards the respectability of three figures. 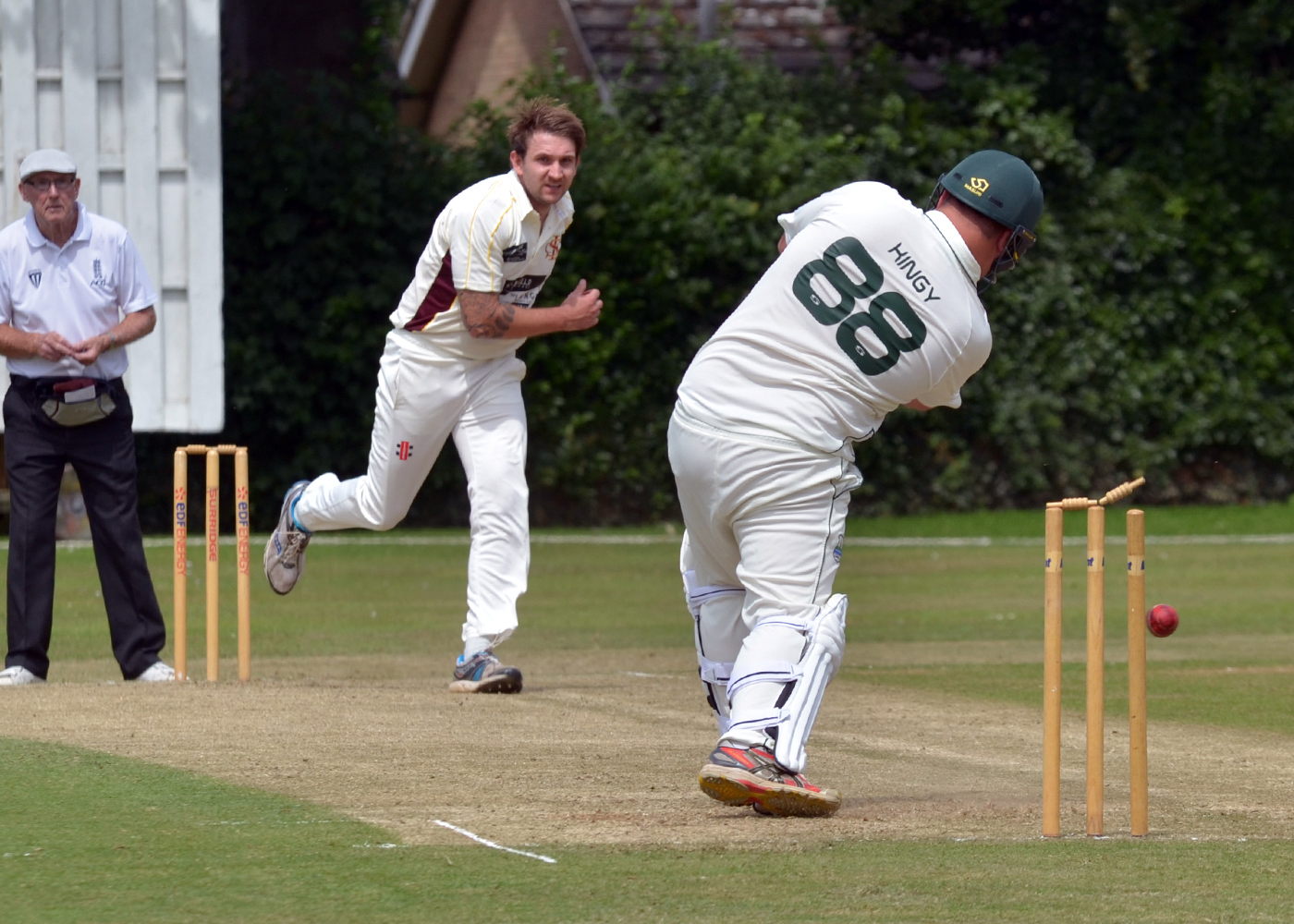 However, they collapsed from 88-4 to 112 all out, with Bull and Simpson devastating the middle and lower order.

In reply, Sutton were in no mood to nudge and nurdle their way to victory.

Openers Adam Wright (36) and Barnes put on 111 for the first wicket, with both finding the rope at regular intervals.

Wright cracked seven fours in his 60-ball knock before being bowled by Lund, while Barnes bagged 11 fours in his rapid 56-ball 58. Dan Oldfield (4 not out) even managed a boundary as he scored the winning runs with his only scoring shot to wrap up the 20-point haul and stay clear at the top. 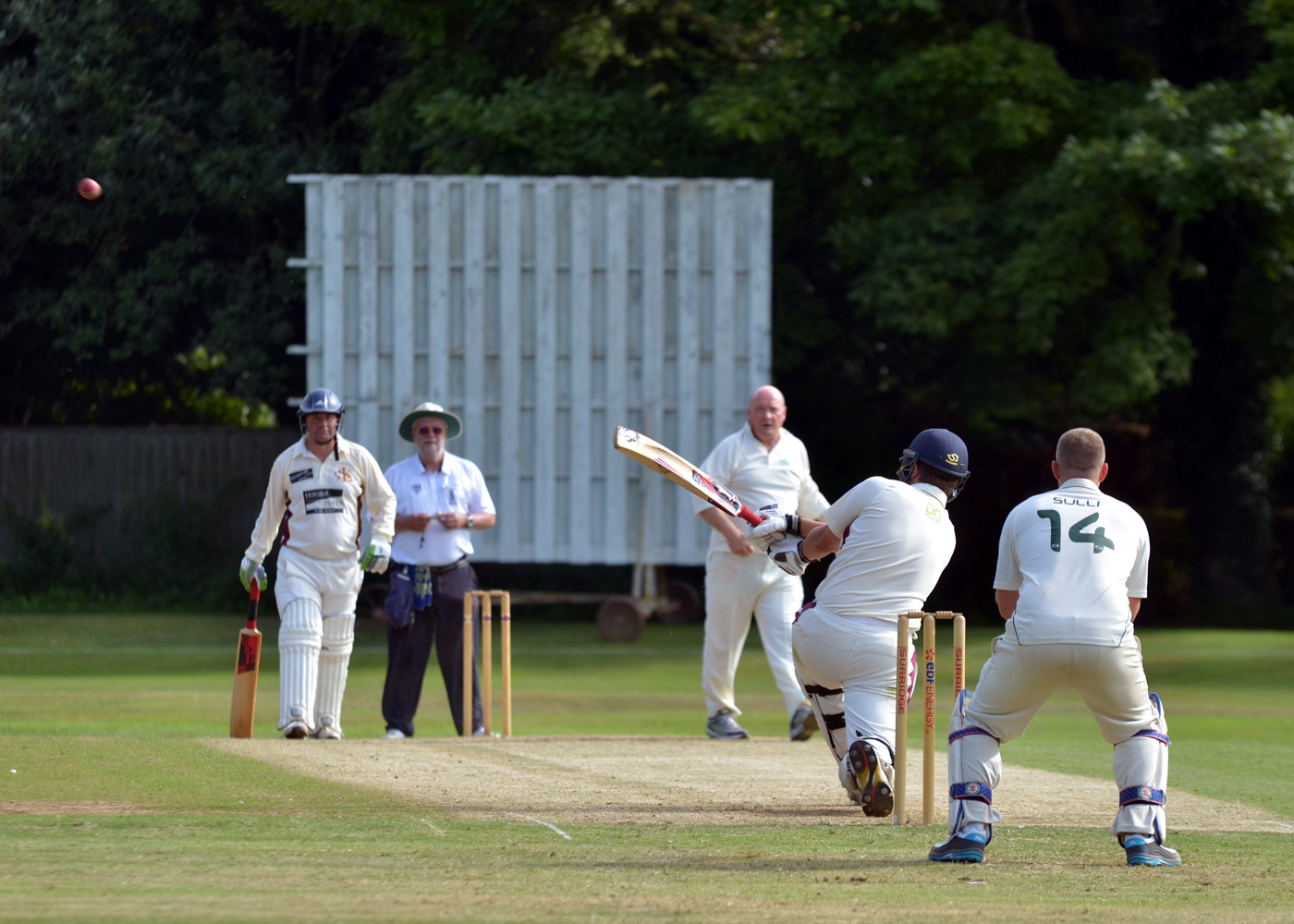 Harrox warmed up for that derby duel by beating Welby by 80 runs.

Jack Barnett cracked a 50 as Moulton posted 186-8, before they bowled the Cavaliers out for 106.

Batting first, table-topping Alconbury made an impressive 230-7 from their 45 overs.

Sutton, who are now 14 points above the drop zone after the defeat, managed a very respectable 208-6 from their alloted overs to collect eight match points.