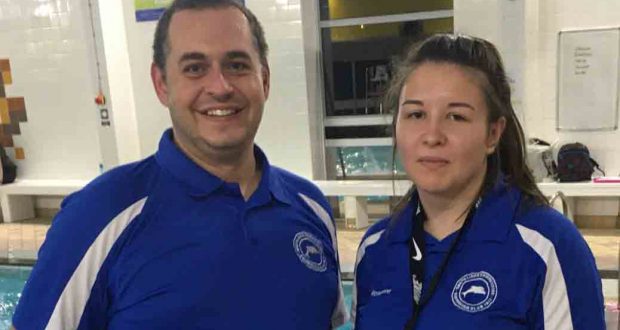 South Lincs Competitive Swimming Club have welcomed Rosanna Abbott to their coaching team as they bid to attract new members.

Abbott is a former swimmer at the Spalding-based club and also a level two swimming teacher.

She brings a wealth of knowledge to share with the club’s youngsters, including her own experiences as an athlete. The new role sees Abbott take over as the lead coach of the club’s Junior Dolphins section, while she will also be working with a number of the junior squads.

Junior Dolphins is South Lincs’ very own teaching programme that prepares swimmers to enter the club’s squad structure and sets them on a pathway for competitive swimming.

The Junior Dolphins have five classes, starting with Dorys and Nemos for those simply building up water confidence and introducing them to the basics of the four strokes.

The Dolphins have progressed to all four strokes and are swimming widths of the pool, while the final stages of the class structure are the Juniors one and two, who are all doing lengths and are mastering all four strokes ready to embark on a competitive swimming career.

South Lincs head coach Keith Haynes said: “I am delighted to welcome Rosanna back to South Lincs, but in a brand new role. She is an excellent teacher who is capable of instructing swimmers of all ages.

“She has a lot of practical experience in teaching and coaching and also has her own competitive background experiences to draw on.”

South Lincs’ Junior Dolphins section are now looking for more swimmers to join them. They welcome swimmers of all ages and levels of swimming ability who might want to have a future in competitive swimming at a club that is producing significant results.

More than half of the club swimmers are Lincolnshire County qualifiers and in 2020 the club enjoyed its most successful championships, claiming 107 medals in total.

Some 20 of the club swimmers were also East Midlands Regional qualifiers, moving on to the next level of competition. The club also boasted eight national qualifiers from 2019.

The teaching programme offers instruction from water confidence and develops a swimmer’s abilities across the four competitive strokes, freestyle, backstroke, breaststroke and butterfly.

South Lincs provides a safe and enjoyable environment that seeks to help swimmers realise their full potential in the sport.

The club is also looking for swimmers to join the squad structure. South Lincs would be interested to hear from swimmers who have completed stage seven or above in a learn-to-swim programme who might be interested in developing a career within the sport.

Email head coach Keith Haynes at krhaynespl34@gmail.com if you have any interest in joining South Lincs.