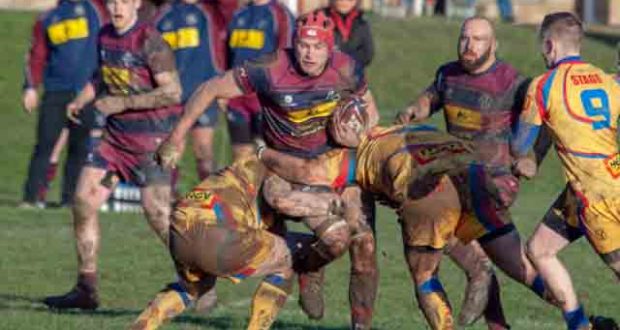 SIXTH: Spalding have been told that sixth place is their final position in Mildands Three East (South). Photo by ADRIAN SMITH

Town, who were fifth in the table before the coronavirus (COVID-19) crisis caused the season to end early, slip behind Dunstablians – who had two games in hand on them – in the final standings.

With promotion and relegation also coming into effect, local rivals Stamford were crowned champions and their near neighbours Oakham secured the second promotion spot.

At the other end of the table, Queens, Northampton BBOB and St Neots have all been relegated.

Coming up from Midlands Four East (North) and Boston and East Retford, while Birstall and Northampton MO are promoted from Four East (South).

Relegated from above are Nottingham Casuals, Ashfield, Melton Mowbray, Luton and Stewarts and Lloyds.

It remains to be seen how next season’s leagues will line up or indeed when rugby will return.

A statement by the RFU read: “Following the early end of the rugby season in England as a result of COVID-19, The Rugby Football Union has announced the final league positions.

“Proposals from the RFU governance committee to conclude the season for those leagues at both professional and community level were yesterday ratified by the RFU Council.

“It was agreed that final standings for the Greene King IPA Championship and men’s and women’s community game would be calculated on a best playing record formula maintaining promotion and relegation for those leagues.”