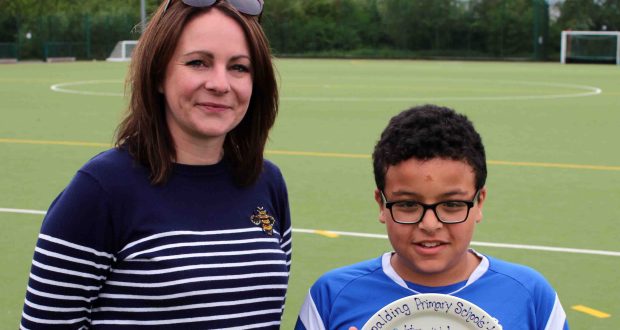 Some 18 teams from 12 local schools contested the finals of the Spalding Primary Schools’ Hockey Tournaments at Glen Park on Friday night.

Having lost the best part of the last two years through COVID-19, it was a relief to all concerned that all five of the tournaments in this school year have now been completed.

Hosted by Spalding Hockey Club, the teams were arranged in graded leagues as always – with the Advanced and Intermediate leagues having four teams and Beginner A and Beginner B leagues with five teams each.

The Advanced League got off to a dramatic start when favourites John Harrox A suffered their first defeat of the year, losing 1-0 to Boston-based Tower Road A in their opening game.

Harrox A found their composure after this shock defeat to beat Monks House (2-0) and Gosberton Risegate (7-0) in what proved to be a decisive scoreline.

Monks House, who were celebrating their first tournament at the top level after promotion from the Intermediate League, opened their account with an impressive 5-2 win over Gosberton Risegate.

Having lost (2-0) to John Harrox A, Monks House bounced back strongly to beat Tower Road A (1-0) in the last game of the day.

Tower Road A, elated at having beaten John Harrox were made to work hard by Gosberton Risegate in their second game but managed a late goal to secure a 1-0 victory.

Just a point from their last game would have seen Tower Road A take the title but a resilient Monks House had other ideas and defended solidly having taken an early lead.

This meant that the top three teams all had six points from their two games and it went down to goal difference.

John Harrox A, with a goal difference of eight, took the title for the fifth time in the tournament’s 11-year history just ahead of Monks House (GD 2) and Tower Road A (GD 1).

The excitement of a close finish was not limited to the Advanced league, as the title for the Intermediate League was decided in the closing seconds of the last game.

Ayscoughfee A were made to work hard in their opening game for their 2-1 win over Boston-based St Thomas’s and followed up with another battle against Tower Road B which ended (2-2) with honours even.

Ayscoughfee A then finished their season with a convincing 3-0 win over St John’s.

Tower Road B started strongly with a 3-0 win over St John’s before being held (2-2) by Ayscoughfee A.

They then faced fellow Boston school St Thomas’s in the closing game, needing to win by a two goal margin to top the table.

Leading 1-0 at half time, Tower Road B were held at bay by a determined St Thomas’s team but in the dying seconds, managed to break through and score the decisive second goal and take the Intermediate League title on goal difference.

John Harrox B showed that there is strength in depth at the school by winning the Beginner A League.

Having been held to a goalless draw by Ayscoughfee B in their opening game, Harrox B went on to record wins over Gosberton Academy A (2-1), Tower Road C (1-0) and St Norbert’s (1-0) to secure the title.

Spalding Parish dominated the Beginner B league winning three of their games, Pinchbeck East (1-0), John Harrox C (3-0) and Gosberton Academy B (3-1) but were denied a clean sweep by locals Surfleet Primary who held them to a goalless draw.

It was a good day for Surfleet as they recorded wins over Pinchbeck East (2-0) and John Harrox C (3-0) and goalless draws with Gosberton Academy B and Pinchbeck East to finish in second spot.

They were also the only team in the tournament not to conceded a goal.

All games were excellently controlled by umpires from Spalding Hockey Club.