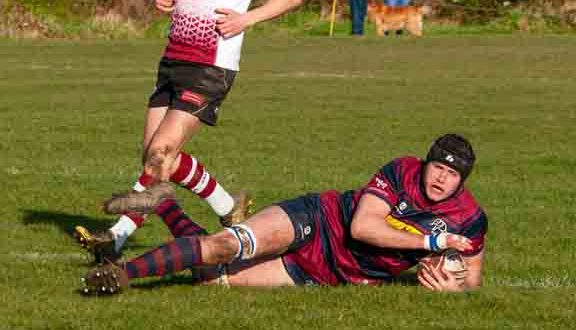 DOMINANT: Ash Piccaver scores one of his two tries. Photo by ADRIAN SMITH

Spalding RFC avenged their surprise loss at struggling Bedford Queens earlier in the season by battering them 75-0 at the Memorial Field on Saturday.

Ruthless Town racked up 13 unanswered tries as they took advantage of a weakened Queens team that travelled with just 15 players – meaning they had no substitutes.

From the kick-off, Spalding caught Queens completely off guard as the home forwards carried the ball to such good effect that Anker broke through the last line of defence with his powerful running and ran in under the posts.

With Booth converting, Town were seven points up within the first minute.

It was clear within these opening exchanges that Queens were going to struggle against a home team who looked fitter, stronger and were motivated by last week’s poor start against Oakham.

Scrum-half Will Shields launched the next scoring move with a good quick pass out to fly half Ingleby. The ball moved through the backs before finding left wing Sharman in a bit of space for a clear run to the try line.

With only 11 minutes on the clock, lock Piccaver broke a couple of attempted tackles and strode through to score.

Queens then suffered the loss of one of their props to injury, and with no subs bench cover, the visitors were down to 14 men for the rest of the match – and the scrums went uncontested.

However, the Bedford side battled well for the next 15 minutes, keeping Spalding at bay (much to their frustration).

Piccaver, playing only his second game since injury back in August, again showed his strength and pace, slicing through a static defence and around the breakdown to go under the posts.

And, with a successful conversion by Booth, Spalding secured their try bonus point and looked well on their way to victory.

Next up was full-back Booth, who showed blistering pace as he cut through Queen’s defence.

Minutes later Bedford could not hold onto Anker as he charged through and side stepped the last man for his second try.

Having switched positions to full-back, Ben Shields, soon joined in the scoring spree for a converted try.

Then, just before half time, Booth on the right wing outpaced Queens’ entire defence with a 40m run before adding the conversion.That meant Spalding had notched up 48 points without reply at the break.

After the interval the Elephants were again on the front foot, pressing their opponents deep into their half and leading from the front. Sure enough, captain Adams, with a powerful burst, soon scored near the post for a converted try.

Within two minutes, fly-half Ingleby went flying through as the gaps opened up to register an excellent try from near the half way line and the floodgates were threatening to open up.

At this stage, the toil was showing on Queens as they were being bashed in the rucks and unable to stop the strong carries by the forwards.

Some 15 minutes into the second half Anker was again proving what a difficult player he is to stop, forcing his way through three attempted tackles to score his third try of the game.

Spalding had to wait a full eight minutes before the next score, with Sharman showing his pace on the left wing for his second try.

Two minutes later flanker Ryan Chappell, who had an excellent match, burst through a rapidly weakening defence for a deserved score.

Queens now had two players hardly able to run and so were effectively down to 12 men.

Their remaining forwards were also nearly out on their feet and, with ten minutes to play, the referee wisely blew his whistle to finish the game on player safety grounds.

The game served as Booth’s last match for Spalding as he jets off to Canada. But he will have the memory of two outstanding tries and five conversions in his swansong to savour.

The win sees Town move up to sixth in the Midlands Three East (South) table ahead of Saturday’s home date with Daventry (2.15pm).