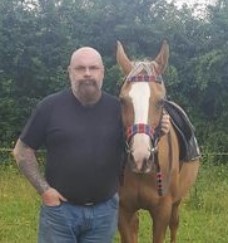 John Murray and one of the horses

Plans to create a place to help integrate veterans in South Holland have been deferred to ask for more information on the project.

Project Dignity says it aims to help groups of veterans by providing accommodation, therapy and support to adjust back into civilian life.

The scheme would house groups of six veterans in accommodation at Station Road, Gedney Hill for up to a year while working with them to reintegrate into society.

Officers had recommended they be approved, but that was voted down by councillors who opted to defer it for more information on who would run the service.

The application was made by former serviceman John Murray, a member of the Christian charity Knights Templar, and supporting information says facilities will be based on ‘military-style’ barracks to create familiar surroundings.

The charity has partnerships with businesses and organisations which can assist with its aims and will also organise a meet and greet open event for villagers to attend and find out more.

“We can look at our vets offering some light work to some of the villagers struggling with age, health etc. Minor repairs, tidying gardens or just a lean over the fence and a chin wag,” says supporting information with the application.

The site is already home to rescue racehorses looked after by Mr Murray’s partner Mellissa Shepherd, trained in equine assisted psychology, (both pictured) and the veterans will have the chance to work with them.

Each programme would last a year and during their stay, the veterans will have the chance to work with horses as part of their recovery from conditions including post traumatic stress disorder (PTSD).

“Through a carefully managed transition, we increase the chance of helping these individuals achieve a more sustainable and safer lifestyle,” says the application.

The veterans will also be able to work within agriculture at nearby farms.

A PTSD counsellor will be on-site along with a manager.

Veterans will begin by spending time helping with gardens, the animals and ultimately the horses.

“To our knowledge there is only one other place that uses horses to rehabilitate veterans, and that’s in Australia.”

The veterans will be housed in single-storey barrack-type accommodation at the site to create a ‘peaceful and restorative environment.’

The initiative has been supported by South Holland and The Deepings MP Sir John Hayes and Coun Paul Redgate.
The cost for the Gedney Hill project is put at just under £1m and both sponsorship and Lottery funding is being requested to help finance the initiative.

While all members of the Planning Committee said they supported the principle, others expressed concern over how it will be run.

Coun Roger Gambba-Jones, told the meeting he couldn’t support it due to a lack of information, though Coun Jim Astill, argued a 15-page document had been submitted with application.

“As someone with knowledge of the tragedy of PTSD and has lost friends with it I have concerns about the setup and the locations,” Coun Gambba-Jone said. “There’s no documentation who is going to back it up given the specialist care that’s required 24/7/

“When a crisis ensues it comes very quickly and in a way that nobody can anticipate.

“The very special medical care that’s required, where is that coming from?

“While I don’t have a problem with the principal of this being set up by anybody, the finance requirement for such a process and for it to be successful and not turn into a tragedy is very significant.

He continued: “There are thousands of veterans living rough and we can help, but as soon as we take any responsibility for placing them in that situation that you aren’t certain of then you’ve moved one step towards being responsible for a situation you’re not sure of.

“They want this for five years. It may be only six people but it’s six people with significant problems and some of those problems could lead to potential death if not properly managed at that time.

“If I’m involved in a decision that puts some people, somewhere in a location in my district and it ultimately leads to something that involves an inquiry, be it a coroner or worse, that is asking how did they get into this location and why was it permitted and we’re found wanting, then I would be ashamed.

“That might sound over dramatic but I don’t care. It’s asking a legitimate question. How would this place work?

“It’s not a difficult question if you know what they’re doing.”

Mr Murray told the meeting: ““We’re very aware any new project will present dangers. This is the nature of the world we live in.

“Our veterans have been recommended to us by charities. They will be formerly assessed to make sure they’re suitable.”

Coun Rodney Grocock, said: “This country owe a great debt to our veterans and a lot of the veterans are disturbed people caused by the war and things too horrible to talk about.

“These people need our support, we have just reaffirmed our commitment to them by signing the Armed Forces Covenant which I’m very proud of.

“I think we should help veterans resettle as much as we possibly can.”

“The principle for this is absolutely sound. If this was a housing application we’d get two bites of the cherry, an outline and then the full application with more detail.

“With this we need the detail. We need to know how the operation will perform on a daily basis.

“Their mental health is of paramount importance.”