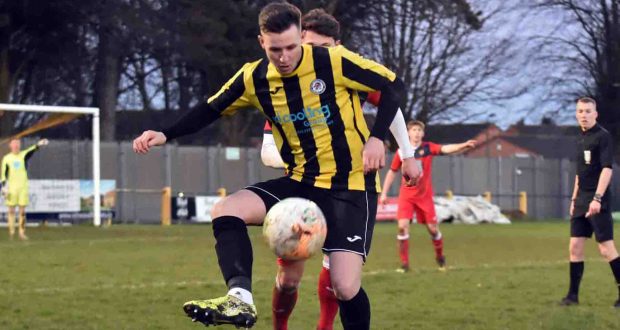 ON TARGET: Lockie netted for the Tigers. Photo by JAKE WHITELEY

A last-gasp strike from Will Barnes earned Holbeach United a 2-1 pre-season win over neighbours Pinchbeck United on Wednesday night.

The Tigers came from behind to win the derby at the Sir Halley Stewart Playing Field, setting up a Lincolnshire Free Press Trophy final with perennial rivals Spalding United at Carter’s Park on Saturday (3pm).

An off-the-ball incident saw Mario Santos (Pinchbeck) and Joe Smith (Holbeach) sent off in the first half, before the Knights went ahead through Joe Cottingham’s powerful header in the second period.

Pinchbeck will now face Bourne Town in the third/fourth play-off at the Sir Halley on Saturday (3pm).