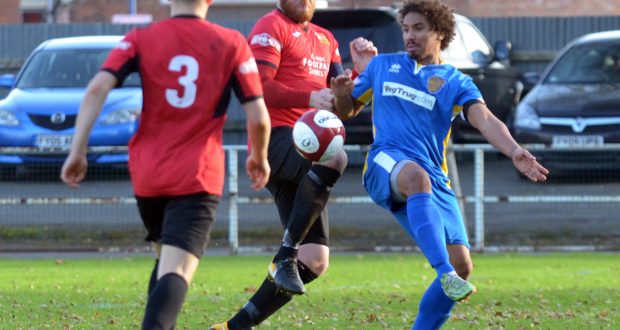 Conceding two early goals left Spalding United with a mountain to climb on Saturday as Kidsgrove Athletic handed them a 3-1 defeat.

Ruben Wiggins-Thomas (5) and Thomas France (10) left the Tulips with a mountain to climb at Hollinwood Road, but Jamie Jackson’s 64th-minute effort set up a grandstand finale.

It wasn’t to be for the Tulips, though, as Lee Williamson’s penalty settled the contest in the final minute on a day when interim boss Lewis Thorogood felt the officials turned the contest into something of a “farce”.

“Ultimately, we deserved to lose the game,” said Thorogood. “I think, at times, we showed a bit of naivety – probably due to the youthful nature of our side.

“We are a side that is developing and learning all of the time, so you will get those inconsistencies.

“I was disappointed with our organisation, work rate and ethic across the pitch in the first half.

“In the second half, things were better. But, unfortunately, the game was marred – for both sides – by very poor officiating.

“That changed the whole game and made it a bit of a, is it wrong to say, farce? I don’t know.

“It certainly made the game very difficult, but we ultimately have ourselves to blame in areas.

“Did we deserve to lose the game? Yes we did. We now have to regroup for a big game on Saturday.”

Both of the goals in the BetVictor NPL South East Division clash came from swift right side movements and penetrating crosses which the Tulips were unable to deal with.

It was a situation that was to continue almost throughout a largely scrappy encounter in which play was constantly interrupted by the referee’s whistle – which resulted in a nine-minute period of added time at the end of the game.

Team changes were forced upon Thorogood, with inspirational captain Lewis Brownhill sidelined with a niggling hamstring and trusty centre back Ben Greenwood away on RAF duty.

Ben Richards, after sitting out a number of weeks on the subs bench, replaced Greenwood while Kevin Bastos also joined the starting line-up.

It was hard work for the Tulips in blustery conditions, but they stuck to the task in hand and were back in the hunt for valuable points when Jackson reduced the arrears with a powerful and well directed header.

But the home side were gifted a third goal in the second minute of added time when goalkeeper Michael Duggan conceded a penalty, crashing into a challenging forward when attempting to punch the ball clear.

Wiggins-Thomas gave KIdsgrove their early advantage with a clinical close range finish from a France cross.

Five minutes later the lively France added his name to the scoresheet, again slotting the ball into the net from close range in a packed area.

It was not until the 35th-minute before the Tulips seriously threatened the home goal when Joel Brownhill forced keeper Kieran Harrison into a full stretch save following a right side attacking movement.

Early in the second half the keeper again came to Kidsgrove’s rescue, this time turning the ball away at the foot of a post to keep out Bastos’ effort which followed neat interchanges between Jackson and Kegan Everington.

The home goal was finally breached in the 64th minute with Jackson on the end of a perfectly weighted free kick by Joel Brownhill.

More good promising Tulips attacking sequences were ended by some strange decisions by the match official, but hopes of snatching a late equaliser were dashed by the injury time penalty, driven home by Williamson.

Kidgsrove leapfrog Spalding in the table as a result, with the Tulips falling down to 11th position.