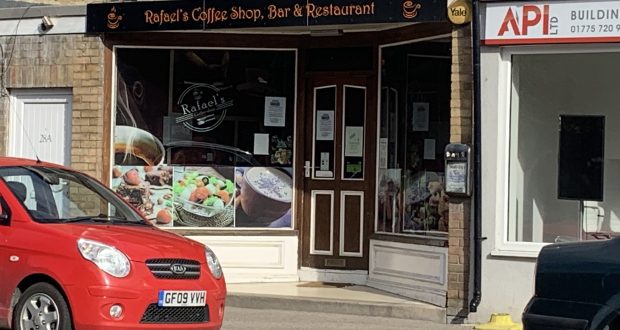 Police were called to a Spalding bar and restaurant which was serving food and drinks at the height of the coronavirus lockdown when a group of 20 people were partying at the back of the building.

The lights were off at the front of Rafael’s in Westlode Street on June 20, but footage from a police body camera shows ‘numerous customers can be seen sat at the bar drinking out of bottles,’ says a report due to go before South Holland District Council’s licensing committee next week.

It is the first time a South Holland licensed premises has come under the spotlight by the committee since the pandemic started.

A police officer called to the cafe asked the owner and licence holder Jorge Carmezim if he knew that pubs were not allowed to be open and Carmezim shrugged his shoulders before telling him he was open for the day. The officer walked through the building to an outside space at the rear where the people had been eating and drinking.

Lincolnshire police’s chief constable Bill Skelly has applied for the licence of the premises to be reviewed as a result of the incident and as the force could not ‘offer any suitable conditions which would prevent the recurrence of such a serious deliberate breach of current legislation.’

“Lincolnshire police have obtained evidence which indicates that the management of these premises have been operating the premises in such a manner that the licensing objectives have been undermined and offences committed,” says the report to members of the licensing committee due to meet on Tuesday.

Along with every other pub, cafe and restaurant during lockdown, Rafael’s was under a duty to close under the restrictions made law as a result of the pandemic. All non-essential venues where people congregate in numbers were closed in a bid to safeguard the wider community from coronavirus.

“Rafael’s has been found to be in breach of the regulations by having multiple customers on the premises consuming drinks,” the report says.

“Many individuals and businesses are facing very serious financial hardship, however, they have chosen to be responsible at a huge personal cost to themselves and their families and abide by the current legislation and therefore not put themselves, their employees and their customers at risk. Lincolnshire Police request that the revocation of the premises licence be seriously considered,”
Members of the committee have a series of options as a result of the review,

from completely revoking the licence totally to modifying conditions attached.

“At such an unprecedented time when Lincolnshire has seen an overwhelming level of compliance with the lockdown measures among licensees around the county who have faced severe financial hardships, the actions and lack thereof by the licence holder have seriously and intentionally undermined the licensing objectives for the prevention of crime, public safety, public nuisance and the protection of children from harm,” the report adds.

The licence for the premises has been held by Mr Carmezim since July 17 2014 and he is also the Designated Premises Supervisor.